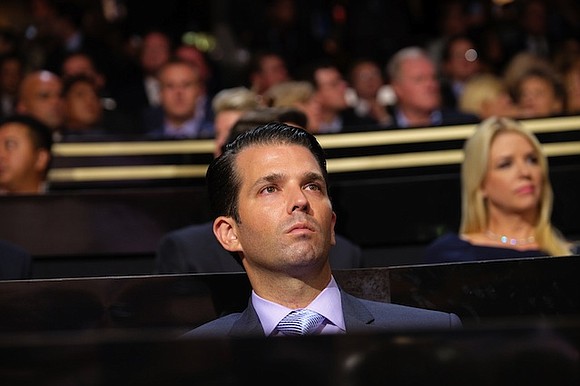 WASHINGTON (CNN) -- The Washington Post dropped an absolute bombshell on Monday night: President Donald Trump dictated the initial statement from his son, Don Jr., regarding a June 2016 meeting with a Russian lawyer and publicist Rob Goldstone, who had promised the younger Trump dirt on Hillary Clinton's campaign courtesy of the Russian government.

"Flying home from Germany on July 8 aboard Air Force One, Trump personally dictated a statement in which Trump Jr. said that he and the Russian lawyer had 'primarily discussed a program about the adoption of Russian children' when they met in June 2016, according to multiple people with knowledge of the deliberations. The statement, issued to The New York Times as it prepared an article, emphasized that the subject of the meeting was 'not a campaign issue at the time.'"

That statement was revealed, in short order, to be heavily misleading. Emails released by Trump Jr. between he and Goldstone showed that the impetus for the meeting was the promise of "incriminating" information on Clinton.

That Trump, according to the Post, was the author of the original statement raises lots -- and lots -- of questions. Here are five of them.

1. What did Trump know when?

This is the central question raised by the Post's new report. Trump -- through his lawyers -- has cast himself as totally clueless about the meeting on June 9, 2016 between Trump Jr., campaign chairman Paul Manafort, son-in-law Jared Kushner, Goldstone, Russian lawyer Natalia Veselnitskaya, Russian-American lobbyist Rinat Akhmetshin, a translator and Ike Kaveladze, a senior vice president at the company founded by the Russian oligarch who initiated the meeting.

"The President was not aware of and did not attend the meeting," Mark Corallo, who was handling press for all things Russia-related, said at the time. (Corallo later resigned.)

But, if Trump really was unaware of the meeting, then how did he dictate Trump Jr.'s statement on the meeting? He knew enough to say that the meeting was "primarily" about adoption policy, right? Did Don Jr. brief the President on the meeting? When? And, how much did he tell his dad? Did he mention that in emails setting up the meeting, Goldstone made clear that there was "incriminating" information about Clinton on offer?

2. Why did Trump attorney Jay Sekulow say Trump had nothing to do with the statement?

"I wasn't involved in the statement drafting at all, nor was the President," Sekulow told CNN's Chris Cuomo last month. So, um, what now? Sekulow, in a statement released to the Post on Monday night, said this: "Apart from being of no consequence, the characterizations are misinformed, inaccurate and not pertinent."

That statement isn't a full-scale denial or an attempt to offer a differing storyline. Or to explain why Sekulow said Trump had no involvement in the drafting of the statement. Did Trump not tell Sekulow? Did Sekulow not ask? If he asked, did Trump tell him less than the full truth?