'Sharknado 5' Rains Down Swarm of Silliness 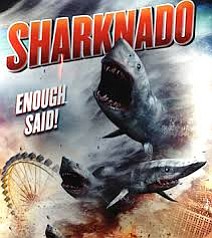 (CNN) -- "Sharknado" jumped the you-know-what three movies ago, once Syfy parent Comcast sought to turn this unexpected social-media sensation into a money-munching, synergistic promotional machine. The latest edition, "Sharknado 5: Global Swarming," hardly reverses that trend but does fleetingly feel a bit more energetic, raining down a relentless barrage of silliness.

Part of that might stem from having a new writer, Scotty Mullen, joining director Anthony C. Ferrante; and a global approach that bounces the characters around the world, which at the very least reduces opportunities to plug sister NBCUniversal properties. Yes, the gang on the "Today" show again pops up, along with a gratuitous Xfinity banner, but so do morning-show hosts in the UK and Australia.

Alas, it's hard to make a silk purse out of a shark's ear -- or rather, fins and entrails -- and "Sharknado 5" quickly runs out of steam. The very unlucky Sharknado survivors Fin Shepard (Ian Ziering), his bionic spouse April (Tara Reid) and Nova (Cassie Szerbo) are again trying to save the world, this time from a wave of sharknados -- whose origins are wrapped in a dense mythology -- that wends from one international monument to another.

The pop-culture references at first prove cleverer, from a "Raiders of the Lost Ark" spoof to Olivia Newton-John joining the onslaught of celebrity cameos, gamely taking part in a "Grease" gag and asking that the principals "don't get too physical."

Throw in a blimp named the Hindenburg (after its patron), and there's momentary hope that "Sharknado" might actually up its game. There's even a "Make America Great Again" joke, which takes on a different hue given the revelation that Donald Trump was sought to appear in an earlier movie.

All told, it's a modest improvement over prior films that, admittedly, exhausted any ingenuity with their cheeky subtitles.

Before it's over, though, the movie feels as if it's simply lurching between cameos, squandering comics like Chris Kattan, Gilbert Gottfried and Margaret Cho. Even a satire needs some sort of connective tissue, but there's no real narrative spine here, just soft cartilage.

Nevertheless, it gives away little to note that like prior sequels, "Sharknado 5" optimistically plants the seeds for a sixth installment. While the math might still work for Syfy, far from going out in a Hindenburg-like blaze, the finish that eventually awaits Fin and company will likely come from old age and boredom, followed by a "What were we thinking?" segment in CNN's eventual documentary "The 2010s."