The 10 Senate Seats Most Likely to Switch Parties in 2018 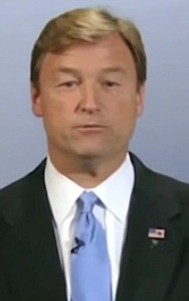 The GOP's Senate recruiting challenges -- failing to land candidates in some states, attracting too many candidates in others, while two vulnerable incumbents are also targeted from within -- mean the party faces a long list of internal battles. Only after those are settled can the GOP fully turn its attention to unseating Senate Democrats in the 2018 midterm elections.

The across-the-board primary battles are complicating what should be a hugely advantageous map for Republicans. Democratic senators are running for re-election in 10 -- that's right, 10 -- states that President Donald Trump won in 2016. The GOP, meanwhile, only has two members who currently look like they could be in real jeopardy.

At stake is control of the Senate, where the GOP currently holds 52 of 100 seats.

Here is CNN's first Senate race ranking of the 10 seats most likely to flip in 2018:

It's one of the earliest races to take shape -- and it's all bad news for Heller.

Danny Tarkanian, who has lost five campaigns over the last decade but won the GOP nomination in four of those five races, is taking on Heller in the Republican primary. And Rep. Jacky Rosen was hand-picked by Harry Reid to challenge Heller in the general election.

Heller also cast a potentially damaging vote for the Senate GOP's health care bill, sticking with party leadership (and with Trump, who had said while sitting beside Heller at a meeting before the vote: "He wants to remain a senator, doesn't he?")

Still, that vote could haunt Heller in 2018 -- particularly because it looked like a flip-flop after Heller stood weeks earlier with popular Republican Gov. Brian Sandoval at a news conference and denounced the House's version of the Obamacare repeal effort. He has also delivered confusing and contradictory answers on whether he supports Planned Parenthood funding.

The health care gymnastics complicate what already looked like a tough race. Heller was elected with just 46% of the vote in 2012. Four years later, Nevada was among the only swing states to favor Hillary Clinton over Trump.

Missouri attorney general Josh Hawley is moving toward a run against McCaskill. He's well-regarded by donors and operatives. And now that several Republicans who were widely expected to run, including Rep. Ann Wagner, have decided against entering the race, he could be looking at a clearer field.

The Republican tilt and Hawley's status as a top-tier challenger make this perhaps the GOP's strongest pick-up opportunity.

Just like McCaskill benefited from Todd Akin's now-infamous comments about "legitimate rape" in 2012, Donnelly benefitted when his Republican opponent, state treasurer Richard Mourdock, asserted in a debate that pregnancies resulting from rape are "God's will."