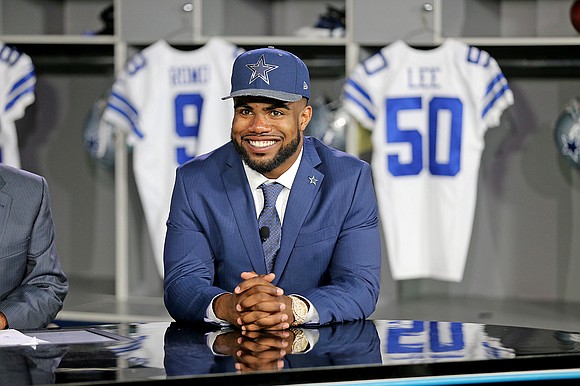 Ezekiel Elliott of the Dallas Cowboys via DallasCowboys.com

Ezekiel Elliott of the Dallas Cowboys was notified today by the NFL that he will be suspended without pay for the team's first six 2017 regular-season games for violating the league's Personal Conduct Policy.

Over the course of the last year, the league conducted an extensive investigation. League investigators interviewed more than a dozen witnesses, including Ms. Tiffany Thompson, who had alleged multiple instances of physical violence in July 2016, and Mr. Elliott. The league also consulted with medical experts. League investigators examined all available evidence, including photographic and digital evidence, thousands of text messages and other records of electronic communications.

Pursuant to the Personal Conduct Policy, Commissioner Goodell sought the views of four external advisors (see below) to assist him in evaluating potential violations. These experts range in experience from law enforcement, judicial and public service, and other specialized subject areas.

The advisors participated in a meeting on June 26, 2017 in New York City with Elliott, who was represented by his legal team and the NFL Players Association. The group also reviewed the league's investigative reports and materials, the expert medical reports, and multiple NFL Players Association submissions on Elliott's behalf.

In a letter to Elliott advising him of the decision, Todd Jones, the NFL's Special Counsel for Conduct, said these advisors "were of the view that there is substantial and persuasive evidence supporting a finding that [Elliott] engaged in physical violence against Ms. Thompson on multiple occasions during the week of July 16, 2016."

After reviewing the record, and having considered the views of the independent advisors, the commissioner determined that the credible evidence established that Elliott engaged in conduct that violated NFL policy.

Elliott may appeal this decision within three days. If he does not appeal, Elliott's suspension will begin September 2, the day of final roster reductions for NFL teams. He is eligible to participate in all preseason practices and games. Elliott will be eligible to return to the team's active roster on Monday, October 23 following the Cowboys' Sunday, October 22 game against the San Francisco 49ers.

KEN HOUSTON, member of the Pro Football Hall of Fame, who played in 14 seasons in the NFL.