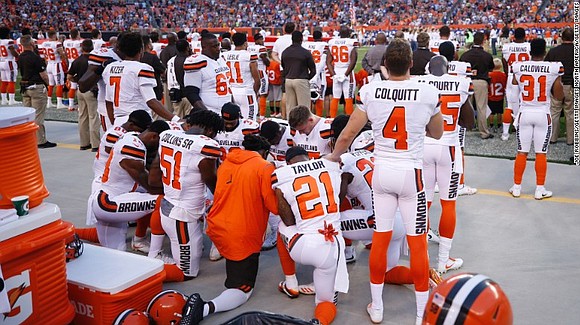 (CNN) -- Colin Kaepernick still is without an NFL team, but that hasn't discouraged players for following his controversial lead and opting not to stand during the national anthem.

Twelve members of the Cleveland Browns took a knee Monday night and shared a moment of prayer before their home preseason game against the New York Giants. Other teammates huddled around the group in support.

It was the largest group of NFL players not to stand during the national anthem since Kaepernick started his protest a year ago, saying he didn't want to "show pride in a flag for a country that oppresses black people and people of color." Kaepernick is biracial.

"There's a lot of social and racial injustices going on in the world right now," said Browns safety Jabrill Peppers, one of the players who knelt. "We were just praying for everyone. Everyone thinks that when you reach a certain level, a certain status in life, certain things you're unaffected by, but that's not the truth. We're all human at the end of the day, and we just have to come together at times like these. It was just us being together, a bunch of teammates praying for the world."

'Time for me to join my brothers'

"Obviously, this is a sensitive subject in our country right now," Kizer said. "Quite frankly -- it is kind of sad on my part -- I don't really know the different teams and what they are doing, but I did see an opportunity with my guys to support them on an awesome venture out there when they decided that they are going to pray in a time where this country is kind of all over the place in a sense of human rights and the racial movements. I decided it was a time for me to join my brothers who decide to take a knee and support them while they were praying."

Kirksey, who led the prayer group, said the group felt like Monday night was the right time to do it. The game was broadcast on national television.

"With everything you do, you have to have respect," Kirksey said. "We did it in a way that resembled prayer. We were just praying over the country and praying over things going on. We did it as respectfully as possible, and we respect everything that happened with things in the military. We respect all of that. We just felt it was the right time for us to do this and say a prayer for this country."

"I, myself, will be raising children who don't look like me," DeValve said. "I want to do my part, as well, to do everything I can to raise them in a better environment (than) we have right now. I wanted to take that opportunity with my teammates to pray for our country and also to draw attention to the fact that we have work to do. That's why I did what I did."

Last year, Kaepernick, then with the San Francisco 49ers, became a lightning rod when he refused to stand during the national anthem.

The quarterback's decision to sit -- then, later, to kneel -- drew fierce criticism but sparked a national movement. Other athletes, from elementary schools to professional leagues, followed his lead.