Harvey: 'We just don't know when it's going to end,' Lawmaker Says 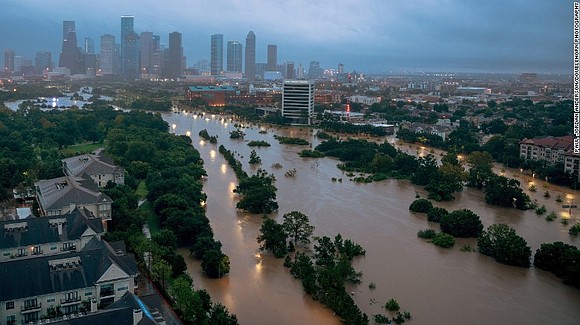 Gov. Greg Abbott has activated the entire Texas National Guard in response to Harvey, bringing the total number of deployed Guardsmen to roughly 12,000, he said Monday. Previously, he had mobilized about 4,000 troops.

Swollen rivers in east Texas aren't expected to crest until later this week, but federal officials are already predicting Tropical Storm Harvey will drive 30,000 people into shelters and spur 450,000 victims to seek some sort of disaster assistance.

And yet, forecasters say, more rain is coming. Lots more.

Several locales have already received 2 feet or more of rain, and forecasters say a reprieve won't arrive till week's end at the earliest. By then, rain totals could reach another 2 feet -- with isolated instances of 40 to 50 more inches -- along the upper Texas coast. 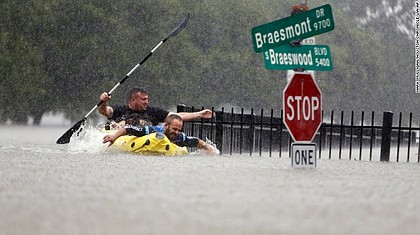 "This is a landmark event for Texas," FEMA Administrator Brock Long said. "Texas has never seen an event like this."

But, Long warned, Harvey presents a dynamic situation, and "every number we put out right now is going to change in 30 minutes."

Harvey will likely surpass 2008's Hurricane Ike and 2001's Tropical Storm Allison, two of the most destructive storms to hit the Gulf Coast in recent memory, he said. Around 13 million people from Corpus Christi to New Orleans were under flood watches and warnings as of Monday morning as Harvey's storm bands repeatedly pummel the same areas.

For state and federal officials working to mitigate Harvey's devastation, one of the more frustrating aspects of the storm is uncertainty.

"The word catastrophic does not appropriately describe what we're facing," said US Rep. Sheila Jackson Lee, D-Texas. "We just don't know when it's going to end."

Early Monday, Harvey was just barely clinging to tropical storm status, but the danger is far from over. The storm is forecast to head southeast toward the Matagorda Bay and Gulf of Mexico where it will pick up additional moisture before sliding back over Galveston and Houston, cities it's already hammered.

Even when the rain is gone, dangers will persist, said National Weather Service Director Louis Uccellini, because "the flooding will be very slow to recede." 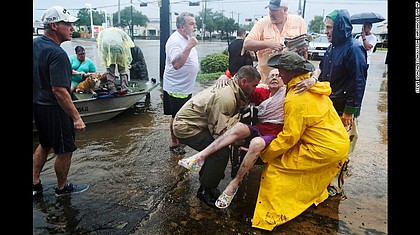 -- Early tallies indicate at least 5,500 people have arrived at shelters in Houston and another 1,000 in Friendswood.

-- The average annual rainfall in Houston is 50 inches. The city has seen 25 inches of rain in two days. Another 25 could fall by Saturday.

-- A mandatory evacuation order was issued for areas along the Brazos River in Fort Bend County.

-- Dallas is opening a "mega-shelter" capable of accommodating 5,000 evacuees at the Kay Bailey Hutchison Convention Center by Tuesday morning.

-- The Houston Independent School District has canceled school for the week for the district's 215,000 kids.

-- Energy provider CenterPoint says 96% of its Houston customers have power, but more than 93,000 are without electricity as the company's crews experience difficulty reaching the affected areas.

-- The storm killed two people in Texas -- a woman in Houston and a man in Rockport -- authorities said, and the death toll will likely rise.

Flooding continued in and around Houston on Sunday as citizens with boats assisted authorities in search and rescue efforts on roads that have turned into rivers.

A CNN crew was with one such volunteer when he used his vessel to rescue an elderly couple, their daughter and two dogs in Dickinson, Texas.

"It was shocking," daughter Pam Jones said of the floodwaters. "It just creeped up."

At Monday's press conference, Long encouraged more citizens to come forward, saying the rescue and recovery efforts would require community involvement. He said the National Voluntary Organizations Active in Disaster website would direct folks to religious and nongovernmental agencies through which residents can help out.

"It's going to require the citizens getting involved," said Long, who was headed to Corpus Christi. "Donate your money. Figure out how you can get involved as we help Texas find a new normal."

The victims so far span at least 30 counties, the FEMA chief said, and that number may be as high as 50 counties.

One citizen answering the call is Jim McIngvale, who owns two Gallery Furniture stores, one in Houston and one in Richmond. He opened his doors to evacuees Sunday night and gave 600 people a place to sleep.

"We have tons of mattress in our warehouse and we can provide them with a blanket. They sleep with a mattress with plastic on it and recliners and wherever they wanted. We have a restaurant inside the stores and we are feeding them for free," he told CNN.

One victim, Aaron Mitchell of Aransas Pass, appeared shell-shocked as he recounted riding out the storm in his mobile home, which he said "felt like 'The Wizard of Oz,' man." He had walked 12 miles to find his father in Rockport, to no avail. Left without cell service for days, he hadn't been able to touch base with his mother in Oklahoma, either.

Though he has no intention of abandoning the place he calls home, he was second-guessing his decision not to evacuate, he said.

"I just lost everything I worked for. Everything," he told CNN. "I don't know. Maybe I should've left."

(Following his interview, Mitchell was able to reach his father via telephone and, in tears, told him, "OK, dad, I'm going to jump on a bus. I'll be there.")

Houston resident Louise Walker also chose to brave Harvey's wrath, leaving her trapped in a neighbor's apartment, watching as authorities prioritized rescues based on who was in the most immediate danger.

"Our bottom level is waist-deep in water," she said. "We have people who are living in these first-floor apartments, like I have. They have been breaking into empty second-level apartments just to have somewhere to go because we can't get out. We're simply completely surrounded with water," she said.

State, local and military rescue units have plucked thousands of stranded residents from the water and from deluged homes. That includes well more than 1,000 victims in Houston and between 800 and 1,200 in Galveston County, officials said.

In Harris County, authorities asked stranded residents to hang sheets or towels from their abodes, so rescuers could spot them more easily.

The US Coast Guard has contributed 18 helicopters to the effort, Capt. Kevin Odditt said. The Pentagon is also identifying resources, including trucks, aircraft and troops, that can be dispatched for hurricane relief if the request comes, defense official said.

Gov. Abbott late Sunday called in an additional National Guard troops to bolster the force of 3,000 he initially mobilized, he tweeted.

This is ahead of schedule because the water levels at the dam began to rise quickly, Linder says.

Harvey's impact by the numbers

"The rationale is it is better to start with controlled releases using the outlet structures than to allow uncontrolled release to go over the edge of the dam. So we have more capability to control the downstream effects," said Edmond Russo with the US Army Corps of Engineers.

In Conroe, an hour's drive north of Houston, record levels of water are also being released from Lake Conroe Dam and flooding is imminent in some areas. The city will be evacuating some neighborhoods as a result,

"Public safety officials have been overwhelmed by the number of calls and are currently prioritizing calls as they come in," the city said in a statement.

In Fort Bend County, a voluntary evacuation order was made mandatory for areas along the Brazos River, with the National Weather Service predicting river levels of 56.1 feet -- nearly two feet above the record during flooding last year.

In Brazoria County, south of Houston, officials set up an evacuation route for its more at-risk residents, ordering them to "LEAVE NOW!" under a mandatory evacuation order. Those in need of shelter can take refuge in the Bell County Expo Center in Belton, officials said.

Stuck in the floods? Here's what to do

Houston Mayor Sylvester Turner warned Sunday night that some 911 calls are going unanswered as operators "give preference to life-threatening calls."

The 911 dispatchers in the nation's fourth-most populous city had received 2,000 requests for rescue, Turner said. As of midday Monday, 2,000 people in Houston had been rescued, almost 290 of those rescues coming Monday morning, Police Chief Art Acevedo said.

About 185 critical rescue requests were pending, the chief said, promising, "None of us (is) going to give up."

As Abbott equated driving into the state's high waters with "taking your life into your own hands," officials reported that many thoroughfares throughout eastern Texas were submerged and unnavigable. Among them were portions of interstates 10, 45 and 610 in Houston.

Harris County Sheriff Ed Gonzalez said he understands the compulsion to find safer ground, but urged people to think twice before venturing out into high water and to consider unforeseen dangers, such as manhole covers being lifted from their holes.

With neighboring Louisiana in Harvey's sights this week, Louisiana Gov. John Bel Edwards wrote to Trump on Sunday requesting that he issue a disaster declaration for the state. Search and rescue initiatives and shelter accommodations will be especially important in Beauregard, Calcasieu, Cameron, Jefferson Davis and Vermillion parishes, the governor wrote.

CORRECTION: An earlier version of this story incorrectly reported that the Addicks and Barker dams are in Galveston. They are in west Houston.