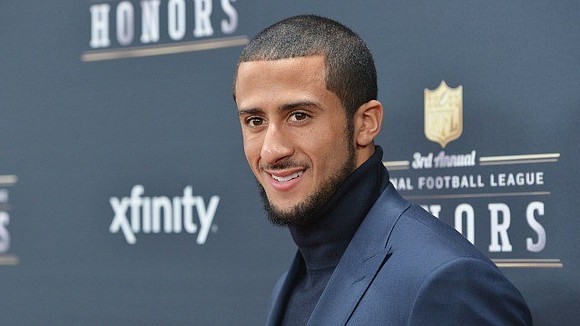 (CNN) -- As Colin Kaepernick made his way to the podium, a surprised crowd broke into thunderous applause.

The former NFL quarterback was honored by the ACLU of Southern California at the Bill of Rights Dinner in Beverly Hills on Sunday, receiving the Eason Monroe Courageous Advocate Award.

"We all have an obligation no matter the risk, and regardless of reward, to stand up for our fellow men and women who are being oppressed with the understanding that human rights cannot be compromised," Kaepernick said.

According to CNN affiliate KABC, Kaepernick's attendance was not announced before the event.

The ex-San Francisco 49ers quarterback became a lightning rod in 2016 when he refused to stand during the National Anthem, protesting what he believes are racial injustices and ongoing police brutality in the US. He drew fierce criticism for refusing to stand but also inspired athletes -- from elementary schools to professional leagues -- to join his movement.

In March, Kaepernick opted out of his 49ers contract and became a free agent. No NFL team has signed him. Kaepernick filed a grievance against the NFL in October, claiming collusion.

"He took a stand knowing he would risk his job, and he has lost his job, one that he loved and was supremely talented and skilled at," Hector Villagra, executive director of the ACLU of Southern California, said.

"He took a stand knowing that some would criticize him, and he has been viciously and unfairly criticized. He has been called a traitor because too many people in this country confuse dissent for disloyalty."

Kaepernick will be honored again on Tuesday, when he will receive the 2017 Sports Illustrated Muhammad Ali Legacy Award at SI's Sportsperson of the Year Award Show at Barclays Center in New York. He recently was named GQ's "Citizen of the Year."

Kaepernick also is on Time Magazine's shortlist for Person of the Year.