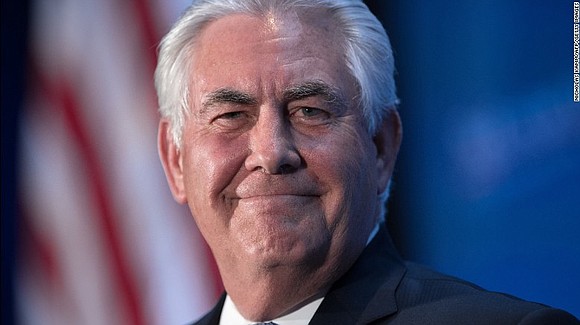 (CNN) -- Secretary of State Rex Tillerson said the US is ready to talk with North Korea without preconditions, in comments that appeared to signal a shift in State Department policy.

"We've said from the diplomatic side, we're ready to talk anytime North Korea would like to talk," Tillerson said at the Atlantic Council in Washington on Tuesday, in what amounted to a direct public invitation for North Korea to put aside an escalating cycle of tests and taunts and engage in diplomacy.

"We are ready to have the first meeting without precondition," Tillerson said. "Let's just meet, and we can talk about the weather if you want. Talk about whether it's going to be a square table or a round table, if that's what you are excited about. But can we at least sit down and see each other face to face, and then we can begin to lay out a map, a road map of what we might be willing to work towards."

The remarks are some of the most concrete issued by Tillerson on what talks with North Korea might look like, though it remains unclear as to whether they reflect the views of the White House. Tillerson has routinely appeared at odds with US President Donald Trump over potential talks with Pyongyang. Earlier this year, Trump tweeted that Tillerson was "wasting his time" negotiating with North Korea.

When asked about Tillerson's Tuesday comments, the White House said "the President's views on North Korea have not changed."

"North Korea is acting in an unsafe way not only toward Japan, China and South Korea, but the entire world. North Korea's actions are not good for anyone and certainly not good for North Korea," Sarah Sanders, the President's press secretary, said in an email.

But Tillerson's comments met with approval in at least one part of the world, Russia.

"We can say that such constructive statements are much more appealing than the confrontational rhetoric which we have heard so far," Kremlin spokesman Dmitry Peskov told reporters Wednesday.

Speaking during a conference call Peskov said Tillerson's stance is "welcomed, and most importantly, is in line with appeals from Russia. As President [Vladimir] Putin has repeatedly said, confrontational rhetoric and any steps that can provoke further tension on the Korean peninsula are absolutely counterproductive. It was Putin who traditionally and consistently urged all interested parties to do everything possible to build channels for dialogue, therefore, such statements satisfy us."

Tillerson had previously said that the United States was willing to negotiate, but has been vague about what would need to happen before both sides sat down together and whether talks would be subject to certain preconditions.

Kingston Reif, the director for disarmament and threat reduction policy at the Arms Control Association, told CNN that Tillerson's comments were the most detailed to date on the potential parameters for talks.

"He made clear that initial meeting(s) can begin without preconditions and without North Korea committing to denuclearization. He also said that talks would be difficult to sustain in absence of North Korea's testing freeze," Reif said.