Disney buys 21st Century Fox: Who Gets What 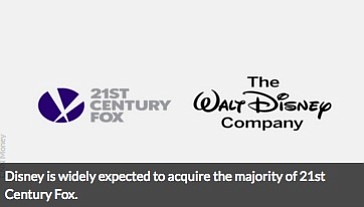 The $52.4 billion deal will combine two of the biggest players in Hollywood.

• Major TV franchises, including The Simpsons, This Is Us and Modern Family

• International media businesses, including 350 channels in 170 countries, Star India and 39% of the European pay-TV operator Sky

• An estimated $2 billion in cost savings