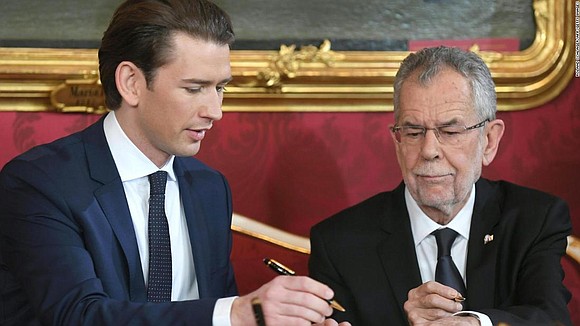 (CNN) -- Austria's new coalition government, which includes the far-right Freedom Party, was sworn in on Monday as demonstrators protested outside.

Austrian President Alexander Van der Bellen, a member of the Green Party, presided over the ceremony on Monday at Vienna's Hofburg Palace.

The new Chancellor is the leader of the centre-right People's Party, Sebastian Kurz, who at 31, is the youngest leader in the world.

The Vice-Chancellor is Heinz Christian Strache, 48, a former dental technician and the Freedom Party's leader.

Police say between 5,000 and 6,000 people attended a demonstration against the new government in Heldenplatz square in front of the palace as the inauguration ceremony was underway.

"After throwing several pyrotechnical objects, they are being asked to stop doing so," the police said.

Even so, protests were muted compared to the last time the far-right entered government in Austria in 2000, when demonstrations nearly brought Vienna to a halt.

"As representative of all Austrians I have the will and the well-being of everyone in mind," President Van der Bellen said in a tweet.

"Incidentally, the same applies also to the new government. From now on, it too has to take the well-being of all Austrians into account," he said.

When the Freedom Party joined the coalition in 2000, the European Union slapped sanctions on Vienna to protest the presence of the far-right in the birthplace of Adolf Hitler.

So far this time, the response from Austria's EU partners has been cautious.

German Chancellor Angela Merkel said in a press conference Monday she hoped Austria would remain "an active partner in Europe." She did not mention the far-right.

She later called Kurz and invited him to come to Berlin soon.

President of the European Council Donald Tusk issued a statement saying: "I trust that the Austrian government will continue to play a constructive and pro-European role in the European Union.

"This is especially important at a time when the European Council is engaging more directly on politically sensitive issues in the context of the Leaders' Agenda. I am looking forward to meeting you soon and to closely cooperating with you during the Austrian Presidency of the European Union in the second half of 2018".

Kurz is set to travel to Brussels Tuesday for a meeting with Tusk and European Commission President Jean-Claude Juncker. He will meet Wednesday with Antonio Tajani, President of the European Parliament.

Unlike in Germany, where the success of the far-right Alternative for Germany (AfD) party in recent elections caused a seismic shock, the Freedom Party has long been part of Austria's political landscape.

Founded by former Nazis in the 1950s, it first entered government 17 years ago, the first far-right party to do so in postwar Europe.