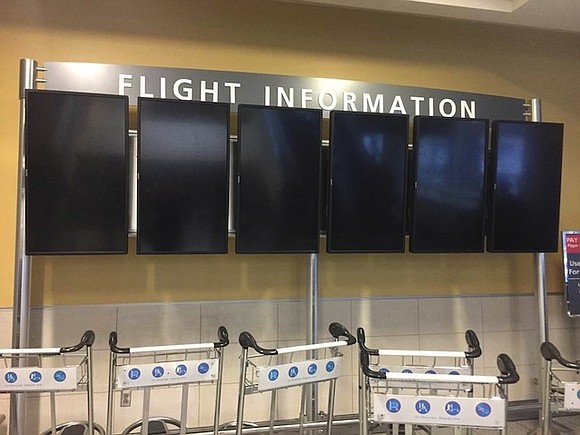 (CNN) -- There were people still sleeping on the floor the day after a power outage shut down operations at the Atlanta airport, but long ticket and security lines were moving -- albeit slowly -- as normalcy began returning to the world's busiest airport Monday.

Mondays and the holiday breaks are busy times for Hartsfield-Jackson International in general. Frequent fliers said the airport felt a little busier than usual, especially in the terminal that hosts Delta, whose headquarters are in Atlanta.

The line for Delta's Sky Priority passengers zig-zagged back and forth seven times and was still backed up to the main entrance to the airport. Some passengers muttered, "Oh my," upon encountering the lines. Others' reactions were more profane.

Volunteers in shirts that said, "Ask Me," tried to allay concerns and passed out doughnuts to those in line, many of whom shared horror stories about the night before.

While some fortunate passengers were able to board the flights departing Atlanta, other passengers were being told they'd have to wait hours or days. One airline was telling passengers it would be five days before they could get a flight out.

'They did pretty well'

When Ashley Hanford, 32, an Atlanta native who now calls Washington home, arrived for her 3 p.m. flight Sunday, the power was already out. Her flight was among almost 1,200 that were canceled Sunday.

She slept in the terminal all night. Speaking to CNN as she charged her phone around 5 a.m. Monday, Hanford said airline and airport employees did their best to take care of stranded passengers, handing out blankets, beverages, even slices of pizza.

"For it to be so chaotic, they did pretty well," she said.

Hanford planned to hang out at a cousin's house Monday before returning for her rescheduled 9:30 p.m. flight, she said.

While airline delays tend to spark short fuses, passengers seemed particularly magnanimous Monday morning. April Hubbard, who was in the security line for her flight to Houston when the airport went dark, reported a lack of communication, widespread rumors, the strong smell of fire near baggage claim and a taxi line that amounted to "pandemonium."

But the people stuck in the airport were "remarkably good," she said.

Another passenger, Suzi Harrington, could miss an adventure of a lifetime if she doesn't get a flight out today. She and three friends were traveling to Tanzania in hopes of summiting Mt. Kilimanjaro on Christmas, she said. As she stood in a long Delta ticketing queue. she said she wasn't angry.

The lights flickered on shortly before midnight, after an exhausting day for travelers. Thousands were stranded in dark terminals and on planes sitting on the tarmac. The ground stop in Atlanta disrupted air travel across the United States.

The effects rippled into Monday, as Delta reported almost 400 flights canceled amid the hangover from the outage. Delta tweeted that it expects flight schedules "to return to normal by Monday afternoon."

Shortly after power came back, some passengers lined up at security screening, hoping to beat the crowds as the TSA checkpoints re-opened at 3:30 a.m.

The outage, which affected all airport operations, started with a fire in a Georgia Power underground electrical facility, Atlanta Mayor Kasim Reed said.

The electrical fire's intensity damaged two substations serving the airport, including the airport's "redundant system" that should have provided backup power, Reed said.

An estimated 30,000 people were affected by the power outage, Reed said.

The disruption led to 1,180 flight cancellations to and from the airport Sunday, according to flight tracking service FlightAware. As Atlanta is the heart of the US air transport system, it also caused problems at other airports, said Desmond Ross, principal of DRA Professional Aviation Services.

"We're talking possibly millions of people disrupted over the next few days and it is certainly not going to be fixed in one day," Ross said.

Cause of fire unknown

At 12:38 p.m., Georgia Power noticed outages in the system that were traced to a fire in underground tunnels where the airport's electric system lives, spokeswoman Bentina Terry said. The fire caused multiple faults that led to the blackout at 1:06 p.m.

The fire's intensity prevented Georgia Power crews from immediately accessing the tunnels to restore power, the mayor said. By 3:30 p.m., fire crews contained the fire. The cause of the fire has yet to be determined, but nothing suggests it was deliberate, Reed said.

"We know there was a failure in the switchgear that caused the fire that absolutely created the issue," Paul Bowers, Georgia Power's president and CEO, told ABC's "Good Morning America" on Monday. A switchgear is a collection of devices that helps control power distribution.

When the switchgear ignited beneath a tunnel housing Georgia Power's cables, he said, it impacted cables in both directions and burned a wall through which the cables travel, taking out both the main system and the backup system.

Investigators were in the tunnel Monday morning, trying to answer several questions -- including whether the fire was deliberately set -- and workers will have the cables fixed this week, Ross told the morning show.

The blackout led the Federal Aviation Administration to declare a ground stop at the airport, preventing Atlanta-bound flights in other airports from taking off and causing inbound flights to be diverted.

People used flashlights on their phones to see where they were going, said passenger Heather Kerwin, an Atlanta resident bound for New York.

"There were a few emergency lights on, but it was really dark -- felt totally apocalyptic," she said. "I decided to get the hell out of there."

The city of Atlanta opened the Georgia International Convention Center for stranded passengers who needed a place to stay for the night, according to the city's Twitter account.

The outage left passengers sitting in planes on the tarmac for hours.

Jodi Green's Delta flight from the Bahamas landed at 1:15 p.m. ET Sunday. Seven hours later, she was still on the plane. Green said the pilot told passengers that other flights that had run out of fuel were evacuated before theirs. Despite the circumstances, she said, order prevailed.

"People are calm, laughing, joking," she said. "I'm amazed I've been able to sit here and not lose my mind."

Delta, which has its headquarters in Atlanta, canceled more than 900 flights Sunday. The airline urged passengers scheduled to fly on Monday to check the status of their flights.