Plane Returns to LAX After Flying With Wrong Passenger for Hours, Airline Says 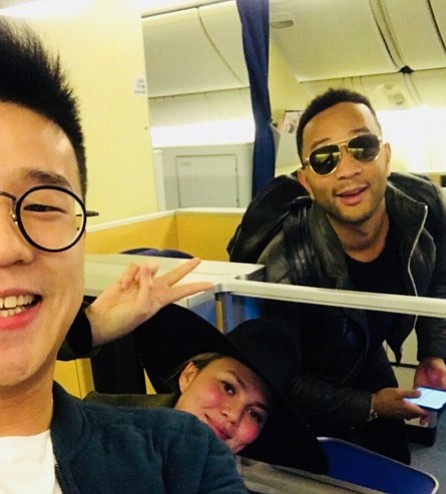 (CNN) -- Chrissy Teigen and other Tokyo-bound passengers ended up right where they started after eight hours of flying: Los Angeles.

The model and TV personality tweeted about surviving her "flight to nowhere" Tuesday night after All Nippon Airways Flight 175 made a sudden U-turn and headed back to Los Angeles.

The plane, which had 226 passengers aboard, turned around four hours into its flight to Tokyo "due to an administrative mix-up," an aviation source told CNN's Rene Marsh.

The crew believed an unauthorized passenger had boarded the flight, and opted to return to Los Angeles even though the mix-up was resolved, according to the source.

ANA told CNN that that the flight returned to Los Angeles as part of the airline's security procedure after someone boarded the wrong flight.

"The cabin crew notified the pilot that one of the passengers boarded the incorrect flight, and the pilot in command made the decision to return to the originating airport," the airline said in a statement.

An investigation is underway to determine how the passenger boarded the flight.

"We take great pride providing exemplary customer service, and on this flight we failed to do so," it said.

The plane had left Los Angeles International Airport at 11:36 a.m. local time Tuesday, and returned at 7:33 p.m., according to the airline.

Teigen, who was aboard the flight with her husband, singer John Legend, tweeted the details of the ordeal as it unfolded. 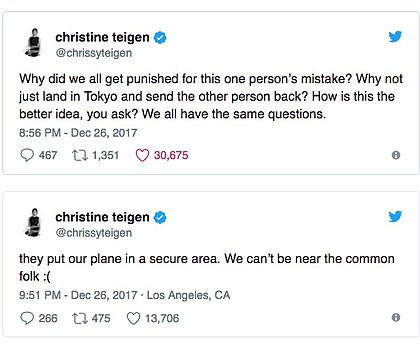 "A flying first for me: 4 hours into an 11 hour flight and we are turning around because we have a passenger who isn't supposed to be on this plane," she tweeted. "Why ... why do we all gotta go back, I do not know."

As the flight to nowhere returned to Los Angeles, Teigen made her questions known.

"Why did we all get punished for this one person's mistake? Why not just land in Tokyo and send the other person back? How is this the better idea, you ask? We all have the same questions."

Teigen later tweeted that passengers were questioned after they returned to Los Angeles.

"They put our plane in a secure area. We can't be near the common folk," she said.

The model kept her sense of humor as she answered questions about the incident.

"I don't know why I'm not more upset about this," she tweeted. "The pleasure I get out of the story is worth more to me than a direct flight to Tokyo."

By early Wednesday, the model had sent a series of tweets about the incident to her 9.2 million followers. She later tweeted that she was taking off on another flight.