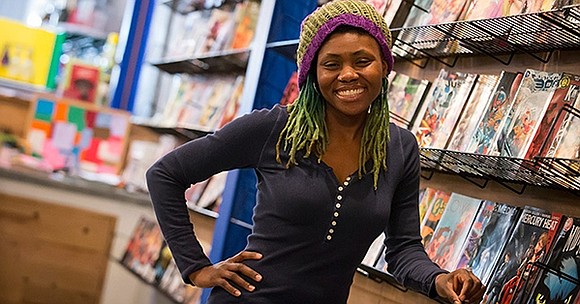 Philadelphia, PA — When entrepreneur Ariell Johnson opened her comic book store and coffee shop in Kensington, Pennsylvania back in December 2015, it became an instant hit both locally and nationally. Being hailed as the first African American woman to open a comic book store on the east coast, she immediately caught the attention of ABC News, CNN Money, MSNBC, and tons of other web sites and blogs.

Regarding her shop which she named Amalgam Comics & Coffee Shop, Johnson told Philly.com, “I think we’re doing well. We’ve had a very strong first year, and an untraditional first year, with all the hubbub around the shop.” She says it all started with her childhood fascination with Storm, the X-Men superheroine. As an adult, this led her to become a huge comic book and sci-fi fantasy fan.

In her honor, Johnson was recently featured on the cover of The Invincible Iron Man No. 1 November 2016 issue with Riri Williams, a new African American female superhero character known as Ironheart. When Johnson saw the cover, she said, “I knew what it was supposed to look like, but having the actual art in front of you is so much different. It’s really exciting.” That particular issue went on to also gain quite a bit of publicity in the world of comics.

The importance of having girls as superheroes

Johnson told Philly.com, “When young girls come in here and know that a woman owns the shop, a black woman owns the shop, and they can see titles where girls are the heroes and not just the love interests or the sidekick… when they see women and girls taking the lead in things, that’s really powerful.”

She says she avidly supports diversity in comic books, not just to include more women superheroes. She also supports the idea of having characters that represent everyone – including Blacks, Latinos, Asians, and people of all religions and sexual identities.