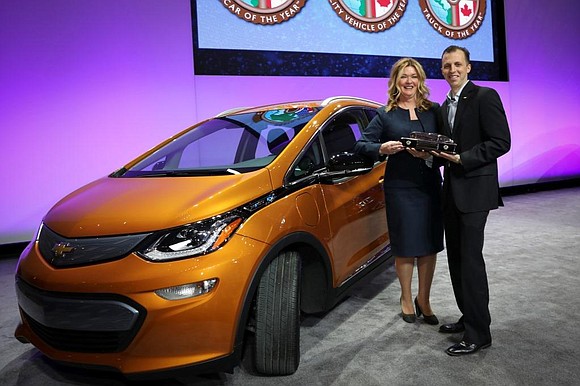 The announcement was made at the North American International Auto Show Monday in Detroit.

The Bolt electric car received 364 points from the jury of automotive journalists across the United States and Canada. The Genesis G90 sedan from Hyundai’s new luxury brand was second with 105, followed by the Volvo S90 sedan with 101.

With an estimated more than 200 miles of range on a single charge†, the Bolt EV redefines exclusive efficiency. Introducing the all-electric 2017 Chevrolet Bolt EV. 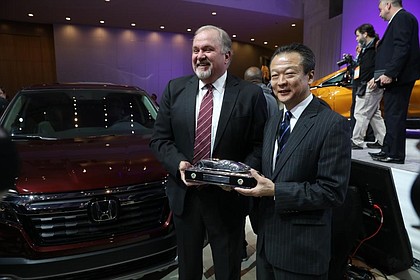 The Chrysler Pacifica minivan got 300 points to top the Mazda CX-9, 135, and Jaguar F-Pace, 125. The award for utility vehicle of the year is new for 2017. It includes sport utility vehicles and minivans. It was added due to surging consumer interest in SUVs, many of which compete with minivans as kid-friendly family transportation. 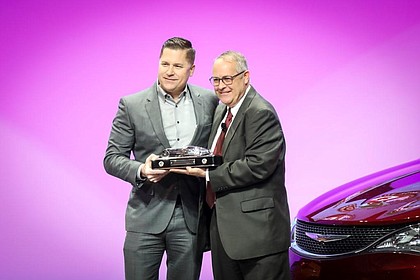 The jury and renowned designer Ed Welburn also presented a check for $5,000 to the Children’s Hospital Foundation of Michigan Foundation as payment for Welburn’s design of a new trophy for the awards. Welburn is a former design director of General Motors.

The Bolt boasts an EPA-certified range of 238 miles on a charge and prices that start under $30,000 after applying tax credits.

The Ridgeline was engineered to offer a pickup bed for cargo on a car-style chassis that delivers a smoother ride than most pickups. It offers unusual features like a “trunk” under its cargo bed’s floor and a double-hinged tailgate that opens down or from the side.

Introduction of the All-New 2017 Honda Ridgeline

The all-new Honda Ridgeline debuted live from the 2016 North American International Auto Show in Detroit on January 11, 2015 at 1:15 p.m. EST.

The Pacifica minivan replaces two models in Fiat Chrysler’s lineup, the Chrysler Town & Country and Dodge Grand Caravan. It’s innovative features include a plug-in hybrid model that can go 35 miles on a charge, enough to cover daily driving for many minivans.

Reinvented from the wheels up, the all-new 2017 Chrysler Pacifica has you covered in every direction imaginable. With 8-passenger seating, revolutinary Stow ’N Go® technology, hands-free sliding doors & liftgate, and the best family entertainment system in its class, the Chrysler Pacifica has set the standard when it comes to minivans.

The North American Car and Truck and Utility Vehicle of the Year awards honor excellence in innovation, design, safety, performance, technology, driver satisfaction and value. Initiated in 1994, they are judged about 60 professional automotive journalists from the United States and Canada who work for magazines, television, radio, newspapers and web sites. They are the longest-running award not associated with a specific publication, a structure that produces a diverse base of jurors.

Jurors evaluated dozens of new vehicles that went on sale this year to determine the finalists.