Bushes' Spokesman: George H.W., Barbara 'both on the upswing' 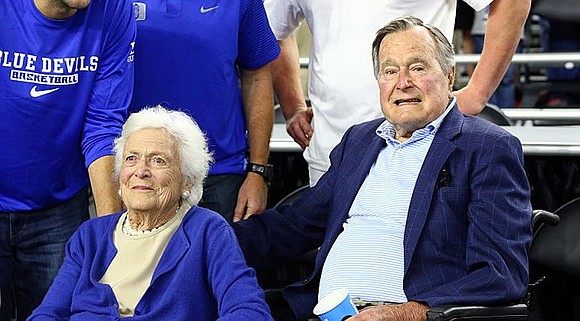 President Barack Obama said at a White House news conference Wednesday his White House has been in touch with the Bush family.

"They have not only dedicated their lives to this country, they have been a constant source of friendship and support and good counsel" over the years, Obama said.

"They are as fine a couple as we know," he added, calling the Bushes "really good people."

"41 and Barbara---thinking about you both and sending wishes for a speedy recovery. Love, 42," he wrote.

President Bush also received a "get well" video from actress Suzanne Somers and his face lit up, McGrath said.

Bush revealed several years ago that he suffered from a form of Parkinson's disease that left him unable to walk. He uses a wheelchair or a scooter to get around and had two other health scares in 2014 and 2015.

In December 2014, he was hospitalized after experiencing shortness of breath, and the following July fell at his home in Kennebunkport, Maine, breaking the C2 vertebrae in his neck.

The injury did not result in any neurological problems, his spokesman said at the time.

CORRECTION: This story has been updated to accurately state the years George H.W. Bush served as president of the United States.

CNN's Kevin Bohn and Kevin Liptak contributed to this report.