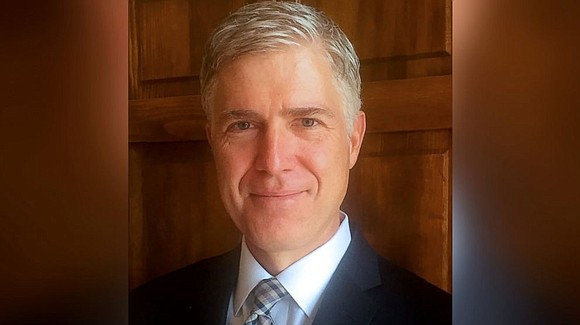 WASHINGTON (CNN) -- In only a few weeks, Judge Neil Gorsuch has gone from the federal appellate bench in Colorado, to one of the leading contenders to be President Donald Trump's nominee for the US Supreme Court.

His quick ascent is due to a combination of factors, including his track record, demeanor and the impression he has made on Trump and the small circle advising him on how to replace the late Justice Antonin Scalia. Another factor -- one beyond Gorsuch's control -- is likely also in play: the fiery atmosphere on Capitol Hill as Democrats vow to make the Supreme Court hearings one of the biggest fights in the early days of the Trump presidency.

These days Gorsuch's name -- previously unknown to many -- has been on the tip of the tongue of court watchers waiting anxiously to see who Trump eventually decides upon. Sources say that Gorsuch is one of the leading contenders of a very short list that also includes Judges William Pryor and Thomas Hardiman.

The pick could be announced as early as next week. Trump met Tuesday to discuss the upcoming nomination with Vice President Mike Pence, Senate Majority Leader Mitch McConnell, as well as Senate Democratic Leader Chuck Schumer and Sens. Chuck Grassley and Dianne Feinstein.

Gorsuch, 49, has been on the radar of some judicial conservatives for some time. He has long been a favorite of legal thinkers at the Federalist Society and the Heritage Foundation.

Conservatives welcome his opinions on religious liberty. For instance, he has sided with closely held corporations who argued that the so called contraceptive mandate violated their religious beliefs.

In another opinion, he challenged the notion that courts should defer to administrative agencies when they interpret the law. It may seem like a dry legal issue but it is central to many conservatives, including Justice Clarence Thomas.

"Judge Gorsuch has been a stern critic of a fixture of the Supreme Court's administrative law jurisprudence -- the idea that, where a federal agency is enforcing an ambiguous statute, courts should defer to how the agency understands the statute even if the courts read it differently," said Stephen I. Vladeck, CNN Supreme Court contributor and professor of law at the University of Texas School of Law.

"If he were to form part of a majority to scale back that principle, it would be a major sea change in the relationship between the executive branch and the courts, and one that would likely impose significant new constraints on the scope of federal regulatory authority on all topics -- from immigration and criminal law enforcement to environmental protection, consumer product safety, and drug regulation," Vladeck said.

"His position on this is more extreme than Justice Scalia," said Dan Goldberg of the progressive Alliance for Justice, "it would be hard to overstate the damage it would cause this nation and the American people."

Goldberg calls Gorsuch an "extreme" candidate for his other opinions as well touching on issues such as a women's rights to access of reproductive health care and the rights of workers and consumers.

But as liberals pour through his record, conservatives stress other factors they say work in his favor.

For instance, he is from one of those square "fly over states" -- Colorado -- and could bring new perspective to the court. At the same time, he spent formative years in Washington where he lived while his mother, Anne Gorsuch Burford, held a top job in the Reagan administration. He also worked in the Department of Justice. He's an outsider -- with an insider's experience.

"I think the conservatives will love him and the liberals will find very little to fault," said Mark Hansen, a former partner of Gorsuch at Kellogg Huber Hansen. "He's an affable, collegial, unpretentious man with a good sense of humor."

Shortly after the election, Adam Feldman, who runs a blog called Empirical Scotus, wrote a piece entitled "An Alternate Take on Trump's Potential Supreme Court Nominees." He ranked the list of candidates and put Gorsuch in the top tier. The criteria for his study included decisions or positions that aligned with Trump in areas such as abortion, gun rights, the Affordable Care Act, and judicial philosophy.

"Although he has not written a decision in any of the controversial policy areas, he regularly uses originalist principles in his decisions," Feldman wrote. And he added that Gorsuch "ranks highly conservative" based on his perceived ideology.

Although Gorsuch has written on issues such as the contraceptive mandate and even penned a book making a legal and moral argument against assisted suicide, he has never had the opportunity to write an opinion on Roe v. Wade. That has raised only a few eyebrows in pro-life circles, others express complete confidence that he won't disappoint them on that front.

Gorsuch is also one of the few on Trump's list who went to an Ivy League school. Not only did he attend Columbia and Harvard Law School but he also studied in Oxford under John Finnis, who now works at the University of Notre Dame and specializes in moral, political and legal theory.

As Trump's teams compares the pros and cons of their top list they will have to deal with the fact that Democrats, led by Schumer, have made clear that the nomination hearings will be a fight. Not lost on them will be the fact that unlike Pryor, who was a part of incredibly contentious hearings, Gorsuch sailed through with no opposition. Placed side by side, McConnell might think Gorsuch, with his laid back style and easy demeanor might have a better chance with Democrats.

Gorsuch was a clerk for Justice Anthony Kennedy, but in a speech last April at Case Western Reserve University School of law, Gorsuch honored the late conservative icon Scalia.

In a speech at Case Western Gorsuch said judges should strive "to apply the law as it is, focusing backward, not forward, and looking to text, structure, and history to decide what a reasonable reader at the time of the events in question would have understood the law to be -- not to decide cases based on their own moral convictions or the policy consequences they believe might serve society best."

It was vintage Scalia.