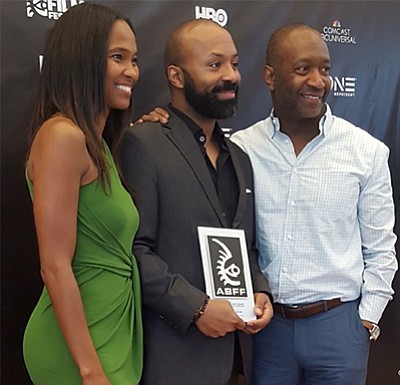 Miami, FL — Devin Haqq, an independent filmmaker, won the 2017 Grand Jury Award for Best Narrative Feature Film at the American Black Film Festival (ABFF) held in Miami on June 18th. The winning film, “Ambition’s Debt” is set in a post-apocalyptic world and adapted from William Shakespeare’s epic tale of honor, ambition, betrayal, and the supernatural. The story follows the downfall of Rome’s most honored citizen, Marcus Brutus, as he conspires to assassinate Julius Caesar.

Haqq is elated to have been selected to participate in this year’s 2017 American Black Film Festival for the film he adapted, directed, produced and starred in. He is grateful to Prudential Financial for supporting this category and for the cash award he received.

Haqq, a Tennessee State University (TSU) undergraduate in Business Administration, also attended the prestigious Alabama Shakespeare Festival (ASF) graduate school at the University of Alabama (UA), in Montgomery, AL where he received a Master’s in the Fine Art of Acting (MFA) in 2001. Devin teaches theater classes for Epic Theater Company where he is a part of the Ensemble and serves as an actor, mentor and teaching artist. A few of the plays he has done with Epic are: “Measure for Measure”, “MacBeth,” “Born with Teeth.” “Ad Astra” is currently in development with Epic.