Ray J Takes Off With His New E-Bike Company 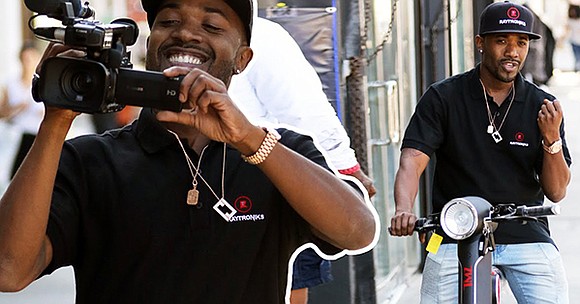 Electronic biking has taken off on a whole new level, thanks to Ray J's new E-Bike company, Raytroniks, which produces the Scoot-E-Bike. This two-wheeled electric bike has everything you need, including Bluetooth connectivity for music, a wireless key lock, and the ability to charge your smartphone via a USB port. Wow!

From Mississippi to Hollywood

Mississippi native William Ray Norwood Jr., better known as Ray J, is an American singer, songwriter, television personality and actor. He is also now an entrepreneur. His company, Raytroniks, makes and sells a 100% electric bike with a top speed of 20 mph and a range up to 30 miles per charge.

The bikes are really taking off, and are even selling to high-profile customers like Sean “Diddy” Combs, Chris Brown, Terrence J and Snoop Dogg. They all seem to really love their Scoot-E-Bikes, which have generated more than $2 million in sales in 2006 alone.

Other products produced by Raytroniks include smart watches and 2-in-1 smart fans that are available in an array of colors.