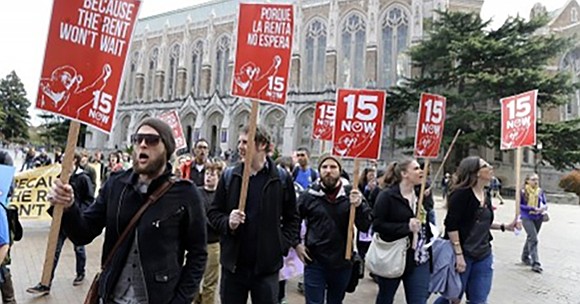 Raising the minimum wage on low-income jobs seems like a good idea. But Seattle's decision to increase their minimum wage to $15/hour turned out to be a very bad idea. Why? It resulted in a significant drop in hours and loss of jobs for low-wage earners.

According to a research team at the University of Washington who studied the city of Seattle's minimum-wage experiment, increasing the minimum wage did not have the effect expected. In fact, it resulted in 6,317 full-time jobs being eliminated, a 9.4 percent drop in hours worked by low-wage workers, and a drop in pay for low-wage workers. According to the research, the drop was $124 a month, a 6.6 percent pay cut.

This is not the first time Seattle has raised the minimum wage for low-income workers. They raised the minimum wage from $9.47 to $11 per hour in 2015 and to $13 per hour in 2016, and now again to $15 per hour. All had the result of lowering hours for minimum wage workers. So, even though workers were getting more per hour, their pay went down each time because of reduced hours, resulting in less and less money in their pockets. In other words, the increase in hourly wage did not work.

What went wrong? Many economists and others feel the minimum wage hike goes against basic economics -- the higher the price, the lower the demand, and vice versa. One Forbes contributing writer stated that a minimum wage in the region of 40-45 percent of the median wage has little to no effect on unemployment. In this range, the increase does not affect other jobs because wages in this range are so little. However, the $15 per hour increase equates to 60 percent of the median wage, and the unemployment effects begin to rise substantially at 50 percent and above of the median hourly wage.

The bottom line is that a good economy is a delicate balance. Makes you wonder, doesn't it, where the economic experts were when Seattle decided to "experiment" with its minimum-wage.

For more details about the study, visit https://evans.uw.edu/policy-impact/minimum-wage-study