Pence On Health Care: 'Inaction is not an option' 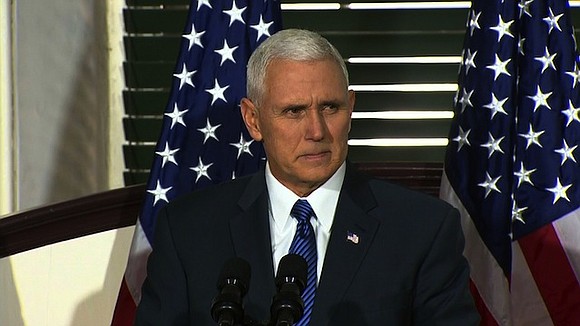 WASHINGTON (CNN) -- Vice President Mike Pence, responding for the first time to the Senate's failure to pass an Obamacare repeal bill, said Tuesday that he and President Donald Trump stand behind the new plan to repeal the health care plan now and replace it later.

Pence used his speech at the National Retail Federation meeting in Washington to deliver a direct message to the Republican senators who bucked their party and came out against the repeal and replace effort on Monday night, all but sinking the Republican's preferred plan.

Most Republicans "were loyal, terrific and worked really hard," Pence said, but some rebelled against the White House and their leadership and signaled that "the Senate still doesn't have consensus to repeal and replace Obamacare at the same time."

After the defeat, Senate Majority Leader Mitch McConnell announced that the Senate would take up the House bill to repeal and replace Obamacare, and then vote on a bill to repeal former President Barack Obama's signature legislative accomplishment.

"President Trump and I fully support the majority leaders' position to move forward with a bill that just repeals Obamacare and gives Congress time, as the President said, to work on a new health care plan that will start with a clean slate," Pence said.

Multiple Republican senators have already signaled that they are either against or skeptical of the McConnell plan, meaning the prospect of that plan working is already fraught.

Pence said that Trump's "inexhaustible optimism and determination" means the fight to repeal Obamacare is not over.

"Stay tuned, we will return," he said, echoing the President. "We will rescue the American people from the disastrous consequences of Obamacare."