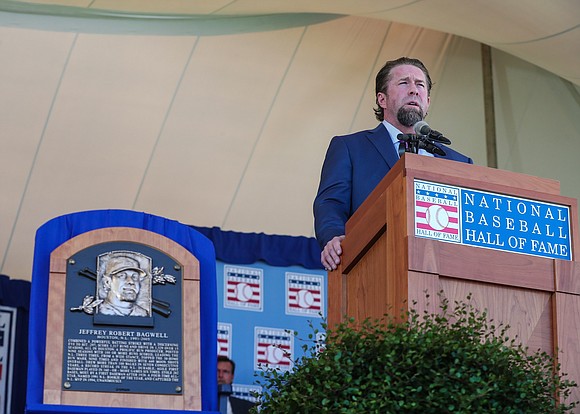 COOPERSTOWN, NY - On January 18, the National Baseball Hall of Fame and Museum officially announced that former Astros All-Star first baseman Jeff Bagwell would be a part of the Hall’s Class of 2017. This afternoon in Cooperstown, NY, that became a reality as Bagwell was officially inducted into the Hall of Fame along with Tim Raines and Ivan Rodriguez. He is the second player to go into the Hall as a member of the Houston Astros, joining former teammate Craig Biggio, who was inducted in 2015.

Sunday’s ceremony was held at the Clark Sports Center in Cooperstown at an outdoor location about one mile from the National Baseball Hall of Fame. More than 50 Hall of Famers returned to Cooperstown for the ceremony along with thousands of fans, many of whom made the journey from the Houston area for Bagwell’s historic moment. Biggio, Astros Owner and Chairman Jim Crane, General Manager Jeff Luhnow, President of Business Operations Reid Ryan, Nolan Ryan, Phil Garner, Enos Cabell, Matt Galante, Larry Dierker, Jose Cruz, Moises Alou and Bill Brown were among the large Astros contingent in Cooperstown this weekend as well.

The Hall’s Class of 2017 also included executives John Schuerholz and Bud Selig. Bagwell earned his place in baseball history in what in what was his seventh season on the ballot.

Bagwell truly was a dominant player for an extended period of his career. In addition to being an elite hitter, he was also known as a solid defender and baserunner. His career hitting statistics are among the best all-time and are superior to many other Hall of Famers.

ONE OF THE BEST EVER

During his illustrious 15-year career, all spent with the Astros, Jeff Bagwell compiled a .297 batting average with 449 home runs and 1,529 RBI while posting a .408 on-base percentage and a .540 slugging percentage. He is the Houston franchise leader in career home runs, RBI, batting average and walks, and ranks second in club history in games,

His .948 career OPS ranks 10th all-time among right-handed hitters and 20th all-time among all hitters. Also, notably, Bagwell played nine of his 15 seasons in the pitcher-friendly Astrodome. A versatile player, Bagwell was considered an outstanding baserunner and defender. He remains the only first baseman in NL history to reach the 30-30 club in home runs and stolen bases in a single season, which he did twice in his career. He also was a Gold Glove winner and currently ranks 3rd all-time in career assists as a first baseman with 1,704.

During his 15 seasons, the Astros had their most successful run in franchise history, qualifying for the postseason six times while finishing at .500 or above 13 times. The Astros had the third-best winning percentage (.531) in the NL from 1991-2005.

In 1994, Bagwell became just the third player in history to win the NL Most Valuable Player Award by a unanimous vote after hitting .368 with 39 home runs, 116 RBI, a .750 slugging percentage, .451 on-base percentage and a career-high 1.201 OPS in just 110 games. Bagwell was a four-time All-Star, earned three Silver Slugger Awards, a Rawlings Gold Glove Award and was the NL Rookie of the Year in 1991.

On August 31, 1990, the Astros acquired a little-known, minor league third baseman named Jeff Bagwell from the Boston Red Sox in exchange for reliever Larry Andersen. At the time, most likely no one in baseball could have known that this trade would go down as one of the most famous deals in Major League history.

In Spring Training of 1991, the Astros moved Bagwell from third base to first base. Bagwell would make the Major League club out of camp and then go on to earn NL Rookie of the Year honors. By 1994, he would become the first player in franchise history to be named Most Valuable Player. The rest is history.

BAGWELL BY THE NUMBERS

One of just 11 players in baseball history to hit at least 400 home runs while compiling a .408-or-higher on-base percentage.

Ranks 3rd all-time in career assists by a first baseman with 1,704.

Only first baseman in ML history and one of 13 players all-time to reach 400 home runs and 200 stolen bases.

One of six players in history to collect 30 home runs, 100 RBI and 100 runs scored in six consecutive seasons (1996-2001). Jimmie Foxx, Lou Gehrig, Babe Ruth, Alex Rodriguez and Albert Pujols are the others.

Registered an OPS above 1.000 in five different seasons.

1,529 RBI ranked second in the Majors and first among right-handed hitters.

Finished in the top 10 of the MVP voting five times.

From 1994-2003, led all first basemen in hits, runs, walks, extra-base hits, doubles and stolen bases, ranked second in games and RBI and third in home runs.

Bagwell rates as a 59 on Bill James’ Hall of Fame Standards, which determines how well a player’s career statistics match up to the typical standards of a Hall of Famer. A score of 50 represents the career of an average Hall of Fame hitter.

“Jeff was an amazing player and a very special guy to play with. He put up incredible numbers offensively, but he was also a smart player, a really good defensive player, a great baserunner and he played the game the right way. I’m so very proud to have played with him for so many years. We were able to change the culture in Houston. Our goal was to win, and Baggy was a major reason for our success. Congrats, my friend. I cannot say how elated I am for you and your family. This is a day you will never forget. Enjoy every minute of it.”

“This is long overdue. Jeff is one of the top, three or four players that I ever played with or against. When I think of Baggy, I think of two things. The first is ‘professional.’ He came to play every day and never took an at-bat off. You can’t say that about everyone. The second thing I think of is what a complete player he was. He was an amazing fielder and baserunner and had an innate grasp of the fine nuances of the game. He was the total baseball player.”

“Jeff played hard every day, and played the game the way it was supposed to be played. He was one of the greatest players of his era!”

“Baggy’s career reaches far beyond the Hall. He was a fantastic teammate. Congrats, #5! Oh yeah!”

“Baggy had a huge influence on me as a player. He wasn’t really outspoken in the clubhouse or on the field but he spoke volumes with how he played. His respect for the game and teammates was exemplified by how hard he played every day.”

“On behalf of the Astros organization, I’d like to congratulate Jeff Bagwell. When Jeff played here, a sign was posted in the weight room that read ‘Bagwell’s Gym, Work Hard, Play Hard or Leave.’ That reveals a great deal about what he was all about. Throughout his career, Jeff worked extremely hard to become a great player. He was a winner and an outstanding representative of the Houston Astros and of the City of Houston. We were thrilled when Craig Biggio was voted into the Hall two years ago, and now we are ecstatic that Jeff will be joining him.”

“This is so great for Jeff Bagwell, the Astros organization and Astros fans everywhere . Jeff’s numbers stand alone. He played the game with grit, determination and a drive to win that few players ever know. This Hall of Fame induction is the fitting tribute to one of the game’s great players. Congrats, Baggy, on a well-deserved honor.”

“I’m so happy and proud for Baggy, our organization, and the fans who loved watching him play. His career was more than Hall of Fame caliber and to see him recognized alongside the greats or our game is simply awesome. Congrats, Baggy!”

“The Hall of Fame often focuses heavily on offensive statistics to determine worthiness. Baggy was much more than his great run-producing statistics. He was a great base runner, Gold Glove defender, and an All-Star teammate. He is the complete Hall of Fame player. I couldn’t be happier for him.”

“Congrats to Bags and his family on being elected to the Hall of Fame today. I got to know Jeff over the first few years of my career and always appreciated the way he played the game. He was a true leader who earned the respect of his opponents as well as his teammates. Congrats, brother, you’ve earned it.”

“Jeff Bagwell stood out as the complete player. He provided power, on-base average and timely hits. He also ran the bases in expert fashion and fielded with the utmost skill, attempting plays that other first basemen could not make. He was one of the most intelligent players in the game. He was the complete package.”

-Longtime Astros broadcaster Bill Brown, who called all of Bagwell’s 15 seasons in Houston

“Jeff was one of the best players in the game for many years and is very deserving of joining this exclusive club. The Astros are blessed to have two Hall of Famers play their entire careers with the same team in the same era.”