Bridging the Gap: Between Advocacy and Education a Panel Discussion Hosted with Independent School Districts in Houston and North Harris County 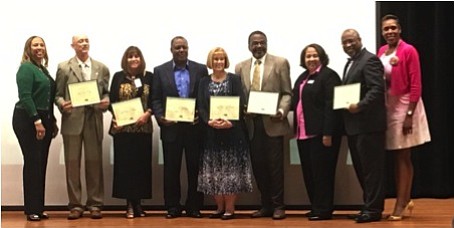 School Board Trustees from area Independent School Districts (ISD) were assembled to discuss the advances in the education system, areas of improvement and ways the community can get involved. Over 50 parents, students and staff were in attendance for the open discussion. School districts represented included: Aldine ISD, Assistant Secretary, Paul Shanklin; Cypress ISD, President, Darcy Ann Maingola; Humble ISD, Trustee Charles Cunningham; Klein ISD, Trustee Cathy M. Arellano, and Spring ISD, Vice President Chris Bell. The discussion opened with the panelist addressing several questions selected by the hosts; What are some of the issues affecting our community that directly impact the education system and How can the community get involved? What are the results of the bond election for your district and What are next steps?

Attendees were engaged during the question and answer section of the program. Residents asked questions regarding the results of the bond election, new schools, classroom size and testing.

“Open dialogue is great and can really help the community make an informed decision. Given what the community has heard here tonight, we hope they will take action and get involved,” said Spring ISD, Board Trustee, Justine Durant, a member of Omicron Tau Omega Chapter.

Board members gave open and honest feedback regarding the current education system and the barriers the districts are facing. “Transparency and communicating to the public is what is needed…. it’s about the children!” said Trustee Charles Cunningham of Humble ISD.

The panel discussion ended with a “Call to Action!” Attendees were asked to post what they will do in their respective communities to get engaged with the school districts using their cell phones and mobile devices. Bridging the Gap: Launching New Dimensions of Education and Advocacy is coordinated by the Omicron Tau Omega Chapter, Connection Committee. This committee is charged with identifying and studying local issues which impact the quality of life of the communities in which they serve. Kelly P. Hodges, Connection Committee Chairman, said “Community engagement is key. We want to follow up with the residence and the district to see if there has been some engagement. We’d also like to plan a follow up event in the fall.”

Alpha Kappa Alpha Sorority, Incorporated is an international service organization that was founded on the campus of Howard University in Washington, D.C. in 1908. It is the oldest Greek-letter organization established by African-American college-educated women. Alpha Kappa Alpha membership includes more than 290,000 women in 1005graduate and undergraduate chapters in the United States, Liberia, the Bahamas, the U.S. Virgin Islands, Germany, South Korea, Bermuda, Japan, Canada, South Africa and the Middle East. Under the leadership of International President Dorothy Buckhanan Wilson, Alpha Kappa Alpha is often hailed as “America’s premier Greek-letter organization for African American women.” For more information on Alpha Kappa Alpha Sorority and its programs, visit www.aka1908.com. Omicron Tau Omega Chapter was founded in Spring, Texas on March 31, 1985 to serve the north Houston community through the implementation of the regional and international programs. The membership of the Omicron Tau Omega chapter has grown to over 130 women in the Spring/North Houston Area to serve the mission of providing service to all mankind through service to the community. For more information, visit www.omicrontauomega.com.