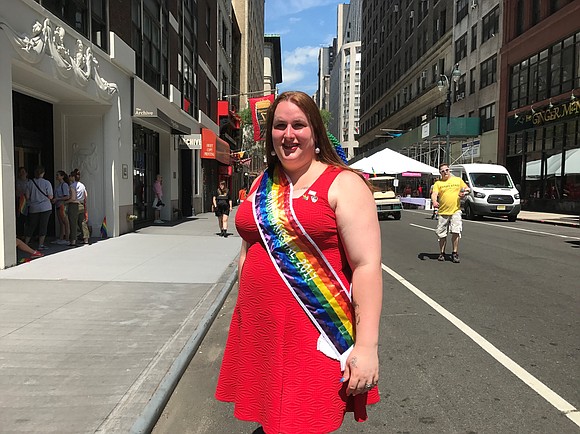 (CNN) -- When Brooke Guinan joined the New York City Fire Department in 2008 she publicly presented herself as a man. She had no idea that on Sunday she'd be one of the NYC Pride Parade's grand marshals while identifying as a transgender woman.

Guinan began identifying as a transgender woman in 2011, three years into her firefighting career at FDNY. She first came out as a gay man at a young age, but began to question her gender identity in college.

Before joining the department, Guinan was unsure what her professional life would look like.

Despite being a third generation firefighter Guinan did not think there was a place for LGBTQ people in the male-dominated fire department.

But Guinan's love of public service ultimately drove her to continue her family legacy in the fire department. There was no LGBTQ training in the beginning.

During her first few years in the department, she served in both firefighting and administrative capacities.

For the past two years, Guinan has stepped out of the firehouse and has served the FDNY as its LGBTQ outreach coordinator.

In this role she has directed and produced training tools and services to better equip the FDNY to understand and work with the LGBTQ community.

"The firehouse can be fun, but I am so enamored with my community and I am very pleased and grateful to do a different kind of lifesaving work in the fire department," Guinan said.

The FDNY has promoted LGBTQ experiences through their social media pages and has also produced its own video in support of the "It Gets Better" campaign, highlighting the stories of LGBTQ public safety employees.

James Fallarino, spokesperson for NYC Pride, said Guinan appears to be the first openly transgender member of the FDNY. She is the first transgender public safety employee to serve as an individual grand marshal. In 2002, two organizations -- the Gay Officers Action League (GOAL) and FireFLAG -- served as grand marshals after 9/11.

Guinan participated in the Pride parade for years before being invited to be a grand marshal.

"It is an amazing honor to be the Grand Marshal of this year's Pride parade," she said. "I have always found inspiration in other people's voices and it is an honor to be given an opportunity for my voice to be heard."

She was one of four grand marshals. The others are Krishna Stone, the director of community relations at Gay Men's Health Crisis; Geng Le, a leader of the LGBTQ equality movement in the People's Republic of China; and the American Civil Liberties Union.

"Our 2017 Grand Marshals are a snapshot of the numerous organizations, individuals, and philanthropists that will leads us through this unprecedented time in our nation," noted NYC Pride March Director Julian Sanjivan in a press release.