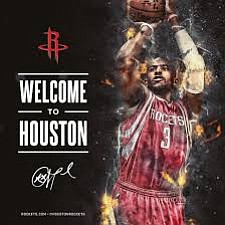 “Since winning back-to-back championships, the pursuit of a third title has remained the ultimate goal for our franchise,” said Rockets owner Leslie Alexander. “We feel that combining two of the league’s greatest players in James Harden and Chris Paul, operating in Coach D’Antoni’s system, gives us a championship caliber team that will compete at the highest level for years to come.”

“On behalf of the Rockets organization and our fans I’d also like to thank Sam, Montrezl, Kyle, and Lou for helping make this past season a special one. I’d also like to personally express my deepest gratitude to Pat Beverley, who, for the past five seasons, always left everything he had out on the court.”

Paul (6-0, 175) has racked up a multitude of honors across his 12 NBA seasons split between the New Orleans/Oklahoma City Hornets and the Clippers. A nine-time All-Star, Paul has also been named All-NBA First Team four times, Second Team three times and Third Team once. In addition, Paul has been named NBA All-Defensive First Team seven times and Second Team twice and helped Team USA capture a gold medal in both the 2008 and 2012 Olympics.

Paul has averaged a point/assist double-double in six of his 12 seasons, including three of the past four. That is already the fourth-highest total in NBA history, trailing only John Stockton (12), Magic Johnson (9), and Steve Nash (7). Four of Nash’s seven seasons averaging a double-double came while playing for current Rockets head coach Mike D’Antoni in Phoenix. Nash was also named NBA MVP twice during his four seasons with D’Antoni.

Among players who were active last season, Paul has the most career assists (8,251) and steals (1,912) and ranks 10th in NBA history in assists and 15th in steals. He joins Jason Kidd, Gary Payton and Stockton as the only players with at least 8,000 assists and 1,900 steals.