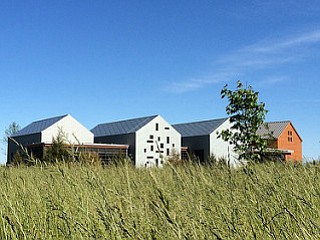 The public is invited to the grand opening of the Harriet Tubman Underground Railroad Visitor Center March 11 and 12. The National Park Service and the Maryland Park Service have teamed up to provide special family-friendly Grand Opening events and activities at the site and a first look at the new visitor center. It is located at: 4068 Golden Hill Road, Church Creek, Maryland. All events are free.

The Visitor Center is the premier feature of the national and state park and includes state-of-the-art, green elements such as bio-retention ponds, rain barrels, and vegetative roofs. It houses an exhibit hall, museum store, information desk, research library, and restrooms. The exhibit features information about Harriet Tubman’s role as a conductor on the Underground Railroad and her work as a freedom fighter, humanitarian, leader and liberator.

Park Rangers will provide talks on topics such as why Araminta Ross changed her name to Harriet Tubman, what skills made her a successful Underground Railroad conductor and the importance of community to enslaved people.

Children’s activities will be offered from noon to 4 p.m. both days including “Games Enslaved Children Played,” about the significance and history of games that enslaved children played and create their own piece of art to remember the park’s inaugural weekend. Junior Ranger activities are also available. Participants get a souvenir hat while supplies last.

On Sunday, Tubman biographer, Dr. Kate Clifford Larson, the visitor center’s historical consultant, will present a talk and book signing for Bound for the Promised Land: Portrait of an American Hero. In addition, architect Chris Elcock, of GWWO, Inc., Architects, will present a talk about the hidden symbolism in the Visitor Center building and surrounding landscape.

“Harriet Tubman is a true Maryland treasure and who remains relevant to this very day,” said Maryland Park Service Manager Dana Paterra. “Her path to freedom was wrought with peril but she persevered and overcame many struggles to become an American icon.”

Free Shuttles from Cambridge: For visitors coming to the site through Cambridge, Maryland, free parking and a shuttle system is available at 410 Academy Street. From Route 50 take Maryland Avenue to Academy Street following signs for “Shuttle Parking.” The shuttle will operate from 10 a.m. to 4 p.m. Saturday, March 11 only. The City of Cambridge is running these free shuttles to the Visitor Center.

For information on how to visit go to nps,gov/hatu or dnr.maryland.gov/publiclands/pages/eastern/tubman.aspx.