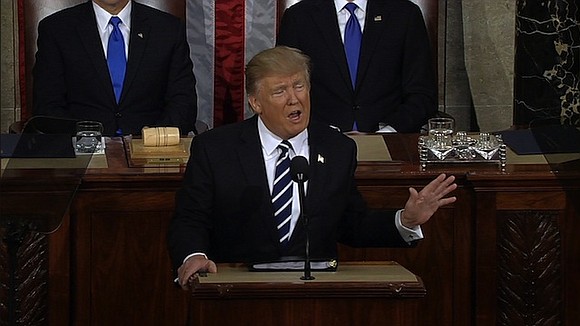 WASHINGTON (CNN) -- President Donald Trump offered Republican leaders on Capitol Hill one thing they desperately wanted to hear in his address to Congress Tuesday night: an endorsement of their Obamacare repeal efforts.

In his first speech to a joint session of Congress, Trump called on lawmakers to repeal and replace Obamacare, warning that the Affordable Care Act -- the health care law that covers some 20 million people -- is simply "collapsing."

"We must act decisively to protect all Americans," Trump said. "Action is not a choice. It is a necessity."

Trump endorsed the major elements of an Obamacare repeal bill that top House Republicans are crafting, a draft of which was leaked last week. The President said he supports protections for individuals with pre-existing conditions, the use of tax credits and Health Savings Accounts, and offering governors more flexibility on Medicaid --- all major elements of the GOP legislation.

But Trump did not say how the party can resolve a range of obstacles on dismantling the current health care system -- including how the GOP would pay for their new plan. And there was no dramatic call for Republicans to act immediately, or even a deadline. It marked a notable shift in tone from just weeks ago, when Trump promised that an Obamacare replacement plan was nearly finished and implored his colleagues on the Hill to vote as soon as possible.

He also did not address an element of the legislation that has become a major sticking point: whether the tax credits would be refundable. In recent days, a slew of conservative lawmakers have come out against the draft legislation, arguing, in part, that the proposed refundable tax credits would amount to a new entitlement program.

Yet for Republicans worried that the health care debate could reach an impasse, it was a win. GOP leaders wanted Trump to explicitly endorse their proposal during Tuesday's prime-time address. The hope is that the President's public backing could help nudge members who have reservations or are on the fence.

As he left the House Chamber at the end of Trump's speech, House Speaker Paul Ryan told CNN's Jeff Zeleny that the President's remarks on health care amounted to a "home run."

"We're all walking on the same page," Ryan said. "He did a fantastic job on health care -- he articulated exactly the response that we're working on that we all believe is necessary to repeal and replace Obamacare with a much better system."

House Majority Leader Kevin McCarthy suggested that Trump's speech could help shore up some conservatives who are still undecided on the GOP Obamacare bill.

"I saw a lot of them standing, applauding," McCarthy said.

The conservative House Freedom Caucus, whose members have been outspoken in opposing the GOP Obamacare draft legislation, reacted positively to Trump's Obamacare remarks.

"We were pleased the President reaffirmed his commitment to fully repeal Obamacare and replace it with patient-centered, market-driven policy," the group said in a statement.

Trump also stated that the burden of fixing the health care system should fall on both Republicans and Democrats.

"So I am calling on all Democrats and Republicans in the Congress to work with us to save Americans from this imploding Obamacare disaster," Trump said.

As Trump said those words, House Minority Leader Nancy Pelosi could be seen shaking her head.