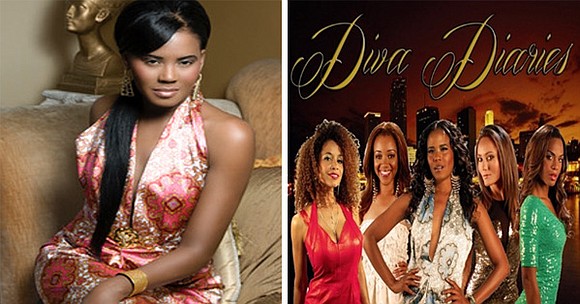 Actress, producer and director Tangi Miller and the artwork for her new film, “Diva Diaries”

Television, film actress and producer, Tangi Miller, makes her directorial debut with her new film, ‘Diva Diaries’, in which she also produces and co-stars, at the Pan African Film Festival 2017 in Los Angeles, California.

Miller’s ‘Diva Diaries’, is about five beautiful women working, living and loving…in all of their fabulousness and of course, some drama. “But not the hair pulling, drink throwing drama we see on TV today. This film has good ‘old fashion’ plot, twists and tension,” said Miller following with huge laughter.

Perhaps best known for her acting roles opposite Kerri Russell for the Emmy award winning WB series, ‘Felicity’, as well as, Tyler Perry’s film, ‘Madea’s Family Reunion’, and leading roles in independent films such as the horror comedy, ‘Leprechaun: ‘Back 2 The Hood’, romantic comedy, ‘Love & Other 4 Letter Words’, ‘The MC Hammer Story’, sci-fi ‘Drones’, romantic dramedy, ‘My Girlfriend’s Back’ and many others.

The successful screening of ‘Diva Diaries’, comes on the heels of Miller winning a Best Diaspora Film award for ‘Boxing Day: A Day After Christmas’, a film which she also produces from the Nollywood & African Film Critics’ Awards, universally known as NAFCA in 2016.

This critically acclaimed actress has starred and produced several independent films, under her own production company, Olivia Entertainment, that include, ‘Good Wifey’, ‘Hollywood Chaos’ ‘Fanaddict’ and ‘Hurricane in A Rose Garden’, just to name a few.

Twice nominated for a N.A.A.C.P Image Award for Outstanding Actress, Miller is named one of TV Guide’s “Sexiest Faces” and Ebony Magazine’s “One of The Most Beautiful People of The Millennium”.

Up next for Miller are follow-up television and film projects, ‘Diva Diaries’ and ‘Boxing Day’ and in post-production her latest film ‘Twin Flames’ set in Atlanta, GA.

For more information about Tangi Miller and her work, visit her at www.hubpages.com/entertainment/Tangi-Miller

Oliva Entertainment is a multi-faceted creative production company, specializing in the art of storytelling in television, motion pictures, and consulting, from the initial project conception, to deliverables and everything in between. With production partners in Los Angeles and Atlanta, Olivia Entertainment is quickly becoming one of the industry’s leading script to screen providers.

About The Platinum Group:

The Platinum Group is a full-service public relations firm doing business for more than 20 years, (www.theplatinumgrouppr.com).