The Ensemble Theatre Kicks off Audience Choice “The Nacirema Society” 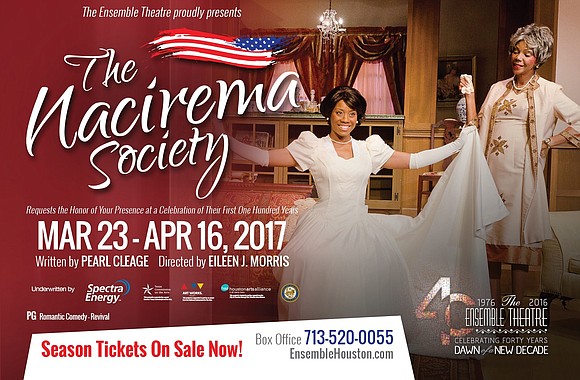 HOUSTON (March 6, 2017) – The Ensemble Theatre kicks off its 40th Anniversary Season audience choice, The Nacirema Society Requests the Honor of your Presence at a Celebration of Their First One Hundred Years, by Pearl Cleage and directed by Eileen J. Morris with Opening Night and media reception, Thursday, March 23, 2017.

Pearl Cleage is the award winning playwright of Blues for an Alabama Sky and Flyin’ West, and the New York Times best-selling author of Oprah book club selection, What Looks Like Crazy on an Ordinary Day.

“The Ensemble Theatre enjoys a rich relationship with Ms. Cleage, having produced four of her plays in previous seasons,” says Morris. “We are also excited to have a production on our 40th Anniversary Season lineup that was expressly selected by our patrons.”

The Nacirema Society was chosen by ballot over more than 60 different productions, and was one of the most acclaimed shows during The Ensemble Theatre’s 35th season.

Every year since Emancipation, the Nacirema Society of Montgomery, Alabama introduces six elegant African-American debutants to a world of wealth, privilege and social responsibility. This year, at its 100th anniversary, with young love brewing, old flames simmering and national media attention on-hand. . . what would dare to go awry? Cleage invites you into this glamorous world where folks still dress for dinner. A sparkling romantic comedy!

The Ensemble Theatre's 2016-2017 Season is sponsored in part by grants from the City of Houston through the Houston Arts Alliance, Texas Commission on the Arts, and the National Endowment for the Arts. United Airlines is the official airline sponsor for The Ensemble Theatre. The Nacirema Society…is generously underwritten by Spectra Energy.