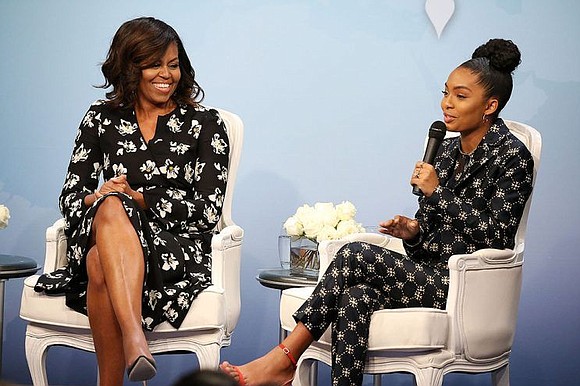 Michelle Obama with Yara Shahidi at “A Brighter Future: A Global Conversation on Girls’ Education” in October. (Photo: Paul Morigi/Getty Images for Glamour)

While many high school students ask a teacher, boss, or close family friend to write a college recommendation letter for them, Black-ish actress Yara Shahidi went straight to the top and asked … Michelle Obama. The two became acquainted at events promoting women’s education and formed a bond.

“She is very amazing and such a supporter, which is something very surreal to say,” Shahidi, who at just 17 has a roster of public speaking engagements lined up, told W magazine. So amazing and supportive that Shahidi said Obama also gave her a “go get ’em, tiger” back rub before she took her AP exams.

Shahidi’s applications are in at East and West Coast schools (including Harvard, where the former first lady attended law school), but she’s yet to announce where she’ll be enrolled in fall 2018. (She’s going to defer for at least a year — like Malia Obama.) However, the impressive teen did tell the magazine that she’ll be double-majoring, in African-American studies and sociology.

It’s easy to see how Shahidi could end up deferring college for more than a year — after all, she’s blowing up professionally. She’s wrapping up Season 3 of her hit ABC show and readying to shoot a pilot for the rumored spinoff, which will focus on her character, Zoey, pursuing higher ed. So, either way, college is in Shahidi’s near future.

For more information go to http://www.yahoo.com