From Yemen to Mosul, Trump's Rocky Start in the Middle East 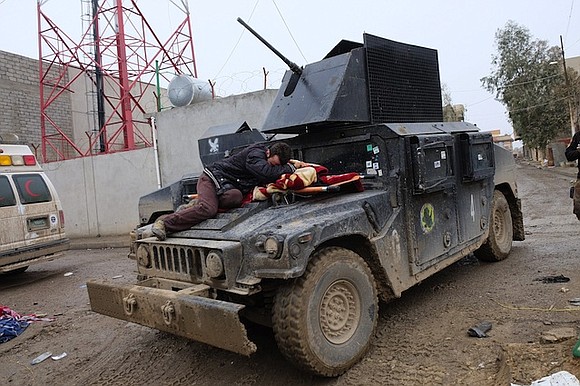 The US and Iraq are investigating whether a US-led coalition airstrike in the city of Mosul was behind the deaths of more than 100 people on March 17. If it is, it could be one of the greatest losses of civilian life caused by the coalition since it began strikes on ISIS in 2014.

(CNN) -- US President Donald Trump has vowed to wipe Islamist terrorism "from the face of the Earth" and says he wants the US to "start winning wars again" -- but he's gotten off to a rocky start in the Middle East.

The US and Iraq are investigating whether a US-led coalition airstrike in the city of Mosul was behind the deaths of more than 100 people on March 17. If it is, it could be one of the greatest losses of civilian life caused by the coalition since it began strikes on ISIS in 2014.

But Mosul isn't Trump's only worry in the region. More than 80 civilian deaths in Syria allegedly caused by the US-led coalition are also being probed. And a raid in Yemen that Trump approved was widely criticized for leaving at least 23 civilians and a US Navy SEAL dead.

All this in the nine weeks Trump has been in office.

The US is intensifying its operations in these conflicts and in Iraq and Syria, it has boosted its presence on the ground.

The Trump administration has already loosened the rules for counter-terrosim missions in parts of Yemen, allowing the Pentagon to carry more of them out without authorization from the White House. And they are discussing doing the same in Libya and Somalia.

There have been concerns that this relaxing of policy might remove a layer of checks and balances and in turn fuel a rise in civilian deaths.

In the past three days, 112 bodies have been pulled from the rubble of flattened homes in western Mosul, where Iraqi forces and a US-led coalition are in an intense stage of their fight to flush ISIS militants from the city. The dead are believed to be mostly civilians.

But confusion has swirled over what caused the homes to crumble.

At first, a civil defense group and local officials blamed the carnage on a March 17 coalition airstrike.

But several theories have since been floated.

The Iraqi military on first inspection of the site thought that ISIS had detonated a large vehicle bomb. Then the head of the Iraqi Counterterrorism Unit in Mosul claimed that the US-led airstrike had hit the vehicle bomb, causing it to explode.

Which version of events is true, if any, is still unknown, but the US and Iraq have both launched investigations into the incident.

The coalition has not denied or confirmed the Iraqi military's account, saying that deaths were still being investigated.

"I tell you, the death of innocent civilians in war is a terrible tragedy, no matter how many, and it weighs heavily on our hearts," Joe Scrocca, a coalition spokesman said on CNN's Amanpour on Monday.

The fight against ISIS is now at a critical stage, and even with great care, the number of civilian casualties is expected to rise, according to the Soufan Group, a risk consultancy firm.

"As the battlefield shrinks and the fighting intensifies, efforts to achieve the crucial objective of destroying the Islamic State in its current form ... and the moral imperative of protecting civilian life and property, will inevitably become increasingly imbalanced towards the former," it said in a note Monday.