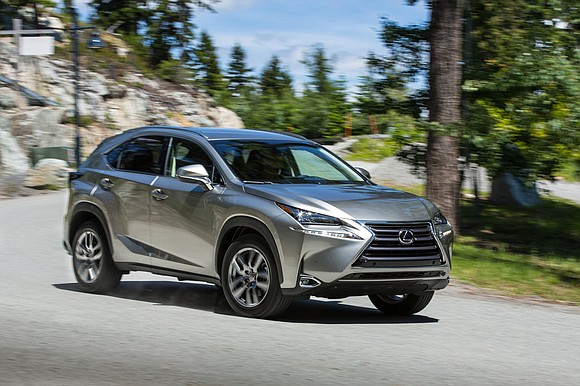 DETROIT – The importance of the Lexus NX 200t is often overlooked. Yes, it did add a much-needed small crossover to the lineup. But it was also a forerunner of the angular styling that has shaped the brand’s entire utility vehicle lineup.

What’s more, the NX was the first vehicle in the lineup to get the 2.0-liter four cylinder turbocharged engine. It made a hefty 235 horsepower and 258 pound-feet of torque from 1,650 rpm to 4,000 rpm.

That’s maximum torque at a fairly low rpm. It translated into the assertive acceleration we felt from just about any speed whether it was on the expressways or city streets. We were a bit surprised that the NX 200t had a six speed transmission. We thought more forward gears would have provided better gas mileage, not that the EPA numbers were bad. The NX 200t got 22 mpg in the city, 28 mpg on the highway and 24 mpg combined.

Of course the exterior design was dominated by the love it or loathe it spindle grille. But that is what good design is about; chose a direction and stand behind it. Lexus is doing that. Some like it while others don’t. But you can’t please everybody; Lexus has learned that lesson and is now making a design statement.

The NX 200t had a crouching, muscular stance that provided good ramp-over angles for light trail driving, and also having the highest point of the vehicle set back toward the rear of the roof. A sharply raked tailgate and integrated spoiler were punctuated by Lexus’ signature L-shape light clusters featuring seamless LED illumination, and the tailgate detailing echoes the spindle grille design.

That is what Lexus said and it was hard to argue with. The NX 200t was distinctive and it could be easily discerned from other mid-sized crossovers.

Handling was really good and it started with a rigid body. They used a bunch of hot stamped tensile steel and aluminum. The NX had a MacPherson strut front suspension and a trailing arm double wishbone setup in the rear that separated the coil springs and dampers for optimal agility.

It was a comfortable ride. A couple of times we had to make relatively tight U-turns and it was no problem. The uneven weather, springtime temperatures one day and wintertime temperatures the next, has created potholes earlier than usual. This suspension smoothed the smaller ones out and kept the thumps and bumps at a minimum.

The interior has been softened. The center console was still angled out toward the driver but the surfaces were slightly curved, in effect make it smoother. The console dominated the interior. It was framed by silver colored bevels.

About the only thing we complained about were the mirrors. The rearview mirror was automatic diming while the sideview mirrors were not. The contrast can be distracting at night. And it reminds us of an automaker that used power seat cushions while employing a manual seat back. It was an obvious attempt to save a couple of bucks. But it came off as chinchy. That’s not Lexus; make those mirrors all automatic dimming or and let it be the owner’s choice.

And they were part of a $565 comfort package that included a power telescope and tilt steering wheel, a navigation system, premium audio system and illuminated door sills. Of course there was Bluetooth, voice controls, satellite radio and the Enform suite of apps.