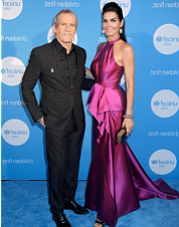 On Wednesday evening, the Southwest Regional Office of UNICEF USA hosted the fourth annual UNICEF Audrey Hepburn Society Ball at the Marriott Marquis in Houston, Texas. The event, emceed by Great Day Houston host Deborah Duncan and featuring a special performance by Michael Bolton, celebrated UNICEF’s lifesaving work and honored UNICEF Ambassador and actor Angie Harmon with the Spirit of Compassion Award. Since her appointment as a UNICEF Ambassador in 2013, Angie has served as a spokesperson for UNICEF USA’s End Trafficking Initiative and has traveled to Vietnam to bring awareness to UNICEF’s lifesaving programs for children.

Rosanette and Harry Cullen were presented with the Margaret Alkek Williams Humanitarian Award for their extraordinary contributions to the causes of children, health and education in the city of Houston and the state of Texas through the Cullen Foundation. Since 1947, the Cullen Foundation has distributed over $450 million in grants to support education and health care initiatives – notably at the University of Houston and at hospitals in the Texas Medical Center – as well as the cultural arts and many other causes. 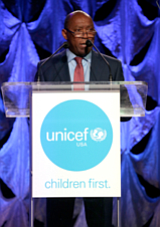 Over the course of the evening, guests enjoyed remarks from Mayor Sylvester Turner, Managing Director of Southwest Region for UNICEF USA Nelson Bowman, Chair of Southwest Regional Board Susan Boggio and Gala Chair of the Audrey Hepburn Society Ball Amy Pierce. The gala featured a moving performance from multiple GRAMMY® Award-winning recording artist Michael Bolton, who sang his hit classic “When a Man Loves a Woman” and a cover of “Stand by Me.”