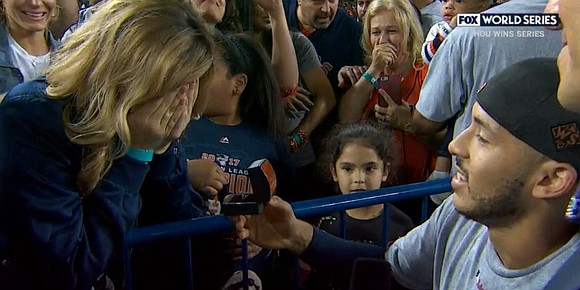 Houston Astros shortstop Carlos Correa was finishing up his interview on Fox minutes after his club clinched its first World Series title when he pulled a ring out of his back pocket and took a knee. "Right now I’m about to take another big step in my life,” Correa said. “Daniella Rodriguez, you make me the happiest man in the world. Will you marry me?" Rodriguez, who won the 2016 Miss Texas USA and 2013 Miss Teen Texas USA pageants, clasped hands over her face and wept. After a long kiss, Correa put the ring on Rodriguez’s ring finger. Correa said he had been plotting it for a while and thought it would be cool to propose after winning a championship. In the ninth inning, he told the clubbie to bring him the ring to the field if they wrapped up the win.