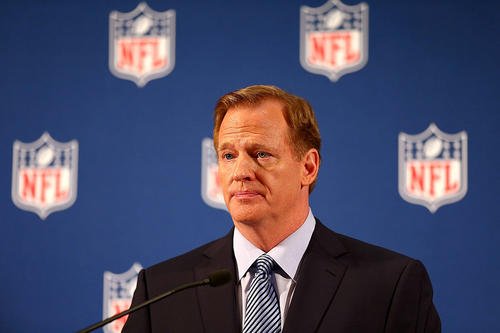 (CNN Money) -- The NFL expects that a contract extension for Commissioner Roger Goodell will be "done shortly," a league source says.

Goodell, whose existing contract runs through next season, has offered to give up "the majority of his contract guarantees" for a deal that would peg more of his pay to performance incentives, the source told CNNMoney.

A second source close to the league told CNNMoney that Goodell's extension is "more likely than not, but still not nearly a sure thing."

This source also said owners are wary of replacing Goodell so soon before the league's collective bargaining agreement with the players expires, in 2020.

The contract discussion comes at a difficult moment for the league, which faces declining TV ratings, growing concerns about brain damage and domestic violence, and player protests over racial injustice.

The terms of Goodell's deal are being considered by a compensation committee comprising six owners: Arthur Blank of the Falcons, Clark Hunt of the Chiefs, Robert K. Kraft of the Patriots, John Mara of the Giants, Bob McNair of the Texans and Art Rooney of the Steelers.

Those six are expected to talk by phone on Monday.

ESPN reported on Sunday that Goodell had asked for a salary of $49.5 million a year, the use of a private jet for life and lifetime health insurance for his family. Goodell was paid $31.7 million in 2015, the most recent figure publicly available.

Two NFL sources disputed the ESPN report. One NFL source told CNNMoney that Goodell already has use of a private jet and health care for his family.

Goodell's leadership has been tested most recently by the protests. They started during a 2016 preseason game when then-49ers quarterback Colin Kaepernick took a knee during the singing of the National Anthem.

The movement grew this year, particularly after President Trump said owners should fire anyone who takes a knee.

Goodell says everyone should stand for the Anthem and the league needs to "move past this controversy." But he also says players have the freedom to express themselves. League rules say only that players "should" stand.

Some fans have said protests are disrespectful to the American flag and to the military, and have boycotted the NFL. Papa John's founder and CEO John Schnatter said the protests have hurt sales and blamed Goodell.

He's not the only person questioning Goodell's leadership and handling of the protests. Dallas Cowboys owner Jerry Jones has even threatened to sue the NFL to block Goodell's contract renewal.

On Sunday, when the Cowboys played the Atlanta Falcons, Jones and Blank, the chairman of the compensation committee, didn't greet each other, as is customary for owners to do at a game.

Jones is also upset over Goodell's treatment of his star running back, Ezekiel Elliott, who was suspended six games earlier this season for domestic violence allegations.

A spokesman for the NFL said all 32 owners agreed previously to give the committee the authority to decide whether Goodell should get an extension.

It's not clear how much Goodell was paid in 2016 and 2017. His salary was cut continually between 2012, when he made $44.2 million, and 2015. That is when the NFL dropped its federal tax exemption. As a result, Goodell's salary is no longer public.