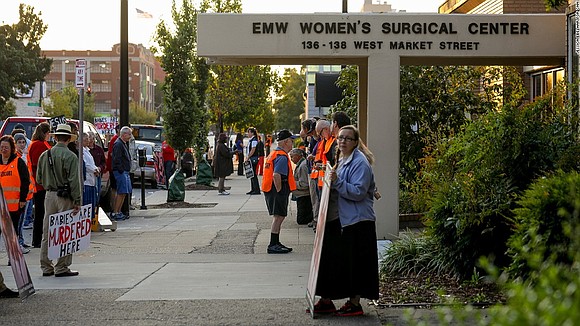 By Holly Yan, CNN Photographs by Jessica Ebelhar for CNN

(CNN) -- Dona Wells vividly remembers when abortions were illegal. When women had little choice after their contraceptive failed.

When some took their chances on dangerous abortions performed by amateurs or even themselves.

That could become reality again in her home state of Kentucky.

Yet states across the country have added more restrictions on abortion access and clinics. And one by one, clinics have shut down under the weight of hefty regulations, threats to doctors' safety and violence.

In Kentucky, the only abortion clinic still standing is the EMW Women's Surgical Center in Louisville -- co-founded by Wells in 1981. But the state is threatening to shut it down, claiming deficiencies in its licensing paperwork.

That would make Kentucky the first state with no abortion clinics.

Now, a federal district judge is considering whether the state's requirements are constitutional. And that decision could get appealed all the way up to the Supreme Court -- raising implications for women nationwide.

The showdown at Kentucky's last clinic

The sun is barely up this Saturday morning, and 24 women are heading to the EMW Women's Surgical Center for their abortions. They vary widely by age and race, arriving in cars ranging from clunkers to luxury vehicles.

As each woman speedwalks to the front of the clinic, she faces a gauntlet of protesters holding giant posters of aborted fetuses.

"Murder in the first degree!" one protester screams. Another pleads, "Honey, change your mind. Darling, you don't want to do this."

David Street drove more than two hours from Kentucky Mountain Bible College to confront the women with his sign: "Babies are murdered here."

"I don't protest. I stand for life," the theology professor says.

He doesn't mind waking up at 3 a.m. for the 150-mile road trip from Jackson to Louisville because he said the progress is real: clinic after clinic is shutting down.

"There were five abortion mills in Kentucky when we started back in the early '90s. And now the Lord has answered -- this is the last remaining abortion mill, not only in Louisville, but also in Kentucky," Street says.

"The conscience is being raised. People are embarrassed over the fact that this sin and murder has gone on."

A few yards away from the protesters, Emory Williamson tries to ignore the vitriol hurled at him. As a volunteer escort, he acts as a shield between the protesters and patients, helping ensure the women get to the clinic door safely.

"You're going to hell!" a protester once screamed as Williamson walked with a client. Another told escorts to stop bowing down "to lesbian feminists."

Williamson, who is white, says he was once called "a reincarnation of a plantation slave owner" after escorting a black couple to the clinic. He's also had his feet stomped on by protesters enough times that he had to buy steel-toe Timberland boots.