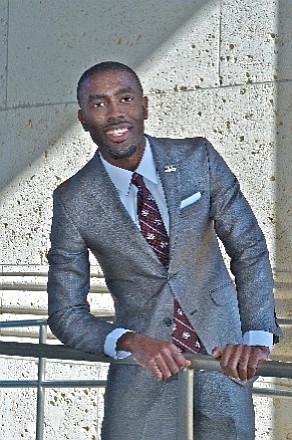 HOUSTON (November 14, 2017) Anthony Collier has been announced as a recipient of the Executive Leadership Council’s (ELC) 2017 Alvaro L. Martins Scholarship. Collier, a senior honors student from Manor, Texas, has a double major in History and Political Science. ELC is the preeminent member organization for the development of global black leaders. Its scholarship programs build a pipeline of black corporate talent by supporting the academic achievement and development of black undergraduate and graduate students.

“Receiving the Alvaro L. Martins Scholarship has been a wonderful experience for me,” Collier said. “I have been able to meet and network with some very prominent African-American business people who lead Fortune 500 companies. Seeing people who look like me and are in high levels of leadership in Corporate America has been amazing to witness first-hand.”

Collier is involved on campus and in the community, serving as a member or leader in several organizations including the Thomas F. Freeman Debate Team, Political Science Club, Student Government Association of the Barbara Jordan-Mickey Leland School of Public Affairs, Pre-Law Society, Collegiate 100, NAACP-TSU Chapter, Political Action Committee Student Organizer for the NAACP Houston Branch, and the Wesley Foundation at TSU. He co-founded the Southern Student Leadership Association (SSLA). Collier has served as a Congressional intern for U.S. Congresswoman Shelia Jackson Lee and participated in the Texas Legislative Internship Program (TLIP) in the Austin office of Senator Borris L. Miles.

He has studied abroad in Israel, Spain and Ghana, and represented Texas Southern in the International Competition for Entrepreneurs (ICE) in Montego Bay, Jamaica, where TSU became the first HBCU to compete on a global level. Collier and a team of four peers won first place in the competition, the first HBCU to win the prestigious title.

The Alvaro L. Martins Scholarship was created in honor of ELC’s founding member and first president/CEO. It is awarded annually to 13 top undergraduate black male students attending one of the nation's top Historically Black Colleges and Universities (HBCUs).