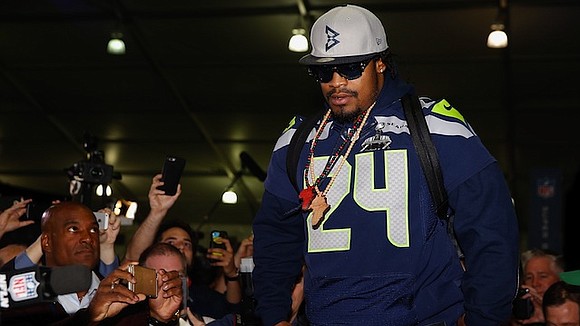 Running back Marshawn Lynch #24 of the Seattle Seahawks

"Marshawn Lynch of the NFL's Oakland Raiders stands for the Mexican Anthem and sits down to boos for our National Anthem. Great disrespect! Next time NFL should suspend him for remainder of season. Attendance and ratings way down," he tweeted.

On a press call about extending NFL games in Mexico through 2021, NFL communications vice presidents Joe Lockhart and Mike Signora were asked about the tweet.

Despite a decline in ratings this season, Lockhart called the Mexico games "overwhelming successes for us on every metric for which we measure."

"President Trump I voted for you, which I now regret. Football is a powerful platform -here's the charitable work we did in Mexico City #NFLproud," she tweeted.

The President and the NFL have butted heads over athletes' decisions to kneel during the national anthem at games, with Trump calling on the league to fire players who protest during the anthem earlier this year.

This marks the second day Trump has taken to social media to criticize African-American athletes.

"Shoplifting is a very big deal in China, as it should be (5-10 years in jail), but not to father LaVar," Trump said later on Sunday. "Should have gotten his son out during my next trip to China instead. China told them why they were released. Very ungrateful!"