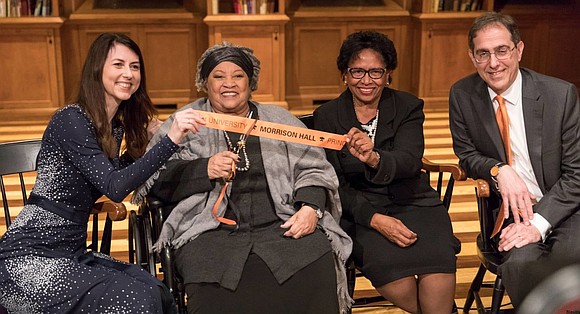 Princeton University showed respect and honor to author Toni Morrison by dedicating Morrison Hall on Friday, Nov. 17. Morrison – who in 1993 became the first African American to be awarded the Nobel Prize in Literature – is the Emeritus Robert F. Goheen Professor in the Humanities at the university. The building dedication took place after Morrison’s keynote address at the Princeton and Slavery Project Symposium.

“This is a very, very special, beautiful occasion for me,” Morrison said.

During the opening fort he dedication ceremony, Princeton President Christopher L. Eisgruber emphasized the importance of Morrison Hall, referring to it as a “181-year-old building that is the home and the heart of the undergraduate college at Princeton University.” Previously, Morrison Hall was called West College, and inside, students can find the Office of the Dean of the College. On Nov. 14, a portrait of Morrison created by Paul Wyse was hung in the building.

“How fitting that the first building named through this process will now honor a teacher, an artist and a scholar who not only has graced our campus with the highest imaginable levels of achievement and distinction, but who has herself spoken eloquently about the significance of names on the Princeton campus,” Eisgruber said, referring to an address Morrison delivered in 1996 at Princeton’s 250th convocation, titled “The Place of the Idea; the Idea of the Place.”

Other speakers at the ceremony included Morrison’s close friend Ruth Simmons, president of Prairie View A&M University and her former student MacKenzie Bezos who graduated from Princeton in 1992 and is now an author. In 2016, the university trustees approved naming and dedicating one of the institution’s most prominent buildings after Morrison. Simmons helped recruit Morrison to Princeton when Simmons was acting director of the Center for African American Studies. In her remarks, Simmons said, “It doesn’t take much for Toni to get a swelled head; this is going to take it over the top.”

Morrison joined the Princeton University faculty as a literature and creative writing professor in 1989. She transferred to emeritus status in 2006. According to the Princeton, the Sula writer played a major role in expanding the university’s commitments to the creative and performing arts and to African American Studies. In 1994, Morrison founded the Princeton Atelier, which brings together undergraduate students in interdisciplinary collaborations with acclaimed artists. Morrison’s papers, which were already a part of the university library’s permanent collection since 2014, became available to students, faculty and worldwide scholars in 2016 for research purposes.