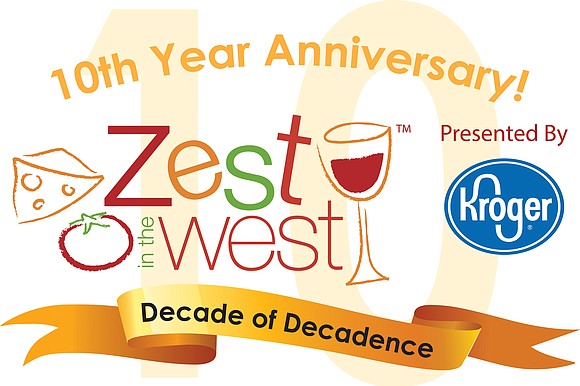 HOUSTON, TX – October 5, 2017, – The Houston West Chamber of Commerce and Food & Vine Time Productions welcome an impressive line-up of celebrity judges for Decade of Decadence at the 10th annual Zest in the West food and wine event, taking place Wednesday, October 18, 2017, from 7 – 10 p.m. at Château Crystale. The is the 10th year the event is being presented by Kroger.

Zest in the West is also an opportunity to support the restaurants on the west side that were affected by Hurricane Harvey either by suffering damage or not being able to receive business because of flooding.

West Houston’s finest restaurants will compete for the coveted title of Best of Zest, and several familiar faces are on tap to judge the competition. Chef Michael Gabriel is best known for his appearances on Food Network’s Cutthroat Kitchen, season 12, and as champion of Camp Cutthroat Kitchen 2. He has also appeared on Fox’s hit TV show Hell’s Kitchen. Phaedra Cook is the editor and publisher of Houston Food Finder, the first online-only publication covering the city’s restaurant and bar scene. Kris Jakob is the owner and executive chef of Brasserie 1895, which was named to Houston Chronicle’s Top 100 restaurants. Renia Butler is president and founder of the Houston Food Blogger Collective, a group of nearly 100 food and wine bloggers. Sherri Segari is the culinary director for Wine & Food Week and The Houston Chronicle Culinary Stars with Food & Vine Time Productions. She is also the owner of LuLu & Ruby Concepts, a marketing, PR and event consultancy. Cleverley Stone, host of the Cleverley Food Talk Radio Show on CBS 650; food segments on Fox 26 and Founder Houston Restaurant Weeks.