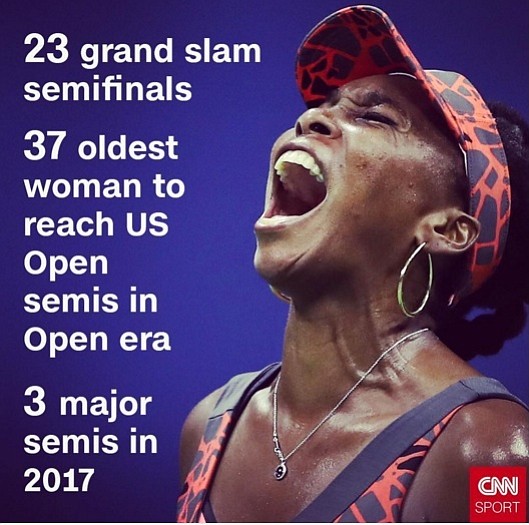 (CNN) -- Venus Williams is the definition of longevity.

It was 16 years ago that the 37-year-old won the last of her two US Open titles and now the American is two victories away from securing what would be a remarkable success in New York.

Williams overcame two-time Wimbledon champion Petra Kvitova in a thrilling three-set contest to set up an all-American semifinal with Sloane Stephens, a compatriot 13 years her junior.

"it definitely felt like a special match," Williams, who came back from 3-1 down in the final set, told reporters.

"There were no easy moments. It wasn't easy to hold serve or break serve. This match meant a lot to me, obviously, playing at home and of course it being a major."

In reaching the last four at Flushing Meadows, Williams -- aged 37 years and three months -- surpassed her own record as the oldest player to make the semifinals of a grand slam and set up the first all-American US Open semifinal since 2002.

Indeed, Williams' statistics are remarkable -- the two-time US Open champion will be playing in her 23rd grand slam semifinal and third in 2017.

Should the American win the title on Saturday, she could rise to No.2 in the rankings which is an incredible feat a player who revealed in 2011 that she had been diagnosed with Sjorgen's syndrome, an incurable auto-immune disease that causes fatigue and joint pain.

Her progress at Flushing Meadows has already guaranteed her a return to the top five of the world rankings for the first time since 2011. 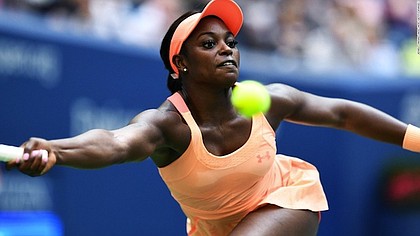 Standing in Williams' way to the final is Stephens, who saw off Latvia's Anistasija Sevastova 6-3 3-6 7-6 (7-4) on Arthur Ashe Stadium to reach her first grand slam semifinal for four years.

The 24-year-old, who has risen 851 places in the rankings since August, only made her comeback at Wimbledon this summer after being sidelined for 10 months with a stress fracture in her foot.

The unseeded Stephens, long seen as the natural successor to the Williams sisters, praised her semifinal opponent.

"Venus is our leader," she told reporters.

Where does Venus Williams rank in the pantheon of tennis greats? Have your say on our Facebook page.

"She's who everyone looks up to. She's a great player, a great person, a great leader. There is not anything bad you can say about Venus. I'm honored to be able to play at the same time as her. I'm happy she's still playing. She means a lot to the game."

With Madison Keys and Coco Vandeweghe set to play their quarterfinals on the 10th day of the tournament, there is still the prospect of a first all-American women's semifinal line-up since 1985.

"It's been a great two weeks for American tennis," added Williams. "Seeing all the American players in the draw and all of them advancing so deep and competing so well.

"All I have known all my life was great American players. So it's great to see this resurgence and I hope it can continue."