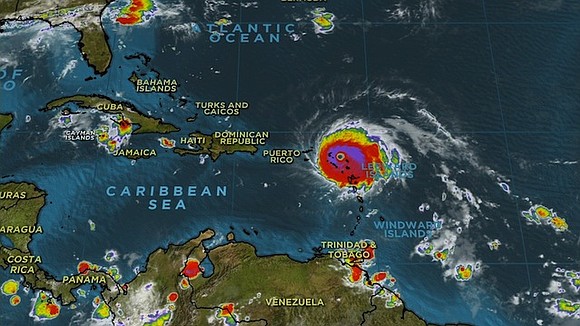 As Hurricane Irma's eye roars away from the tiny island of Barbuda and toward St. Martin, residents along its path scrambled to evacuate while stocking up on water, food and gas.

(CNN) -- Irma slammed into Florida this morning, threatening to devastate much of the state.

We'll bring you the latest developments in our live blog (Click here).

You can find photos, videos and other articles about one of the strongest hurricanes ever seen in the Atlantic in our Hurricane Irma page (Click here).

And you can follow our up-to-the-minute coverage on CNN.

Hurricane Irma hit the Florida Keys this morning. The National Hurricane Center said the hurricane's eye made landfall at Cudjoe Key, Florida, in the lower Florida Keys just after 9 a.m. ET. Irma's a Category 4 hurricane right now, with sustained winds of 130 mph. It's also bringing with it storm surges that may reach as high as 15 feet. And they are a hurricane's greatest threat.

Irma's path shifted slightly to the west overnight, sparing Miami a direct hit, but it put cities like Tampa, Fort Myers and Naples in its crosshairs. It'll drop to a Category 3 storm before it continues its trip north along Florida's west coast and into the panhandle. Irma will continue to weaken, but bring still-dangerous heavy rain and high winds tomorrow to parts of Georgia and Alabama, where hurricane and tropical storm watches and warnings have been issued.

Rescue teams and first responders in Miami Beach and Collier County, Florida, won't be responding to emergency calls until the storm has passed and the violent winds die down. President Trump, meeting with his Cabinet at Camp David, said he approved emergency declarations in Florida, Georgia, South Carolina, Puerto Rico and the US Virgin Islands. And FEMA has started a special page to debunk rumors and highlight scams.

An estimated 6.3 million people were ordered to evacuate Florida as Irma approached. Hundreds of thousands left, carrying with them a few precious things. But many hunkered down as best as they could to ride out the storm. People like Peggy Monahan, who lives in Fort Pierce and stayed to take care of her farm. Florida's economy is the fourth-largest in the US and it's bracing for a possibly catastrophic hit.

Hurricane Jose, a Category 4 storm, is actually moving away from some of the very same Caribbean islands hit a couple of days ago by Irma. Jose's on a track that will move it to the north. The third storm out there, Katia, made landfall Friday as a Category 1 hurricane in Mexico, where it's weakening and expected to break up.

Quote of the day

"You're on your own"

That's what Federal Emergency Management Agency chief Brock Long told Florida Keys residents who didn't evacuate. Residents won't get immediate aid from federal first responders after the storm passes until it's safe for them to go in.

Number of the day

Video of the day

Even though Miami escaped a direct hit from Irma, the storm's outer bands were still strong enough to spin construction cranes there. (Click to view)

In the Miami district of Lynwood, construction cranes are blown by incoming winds from Hurricane Irma.