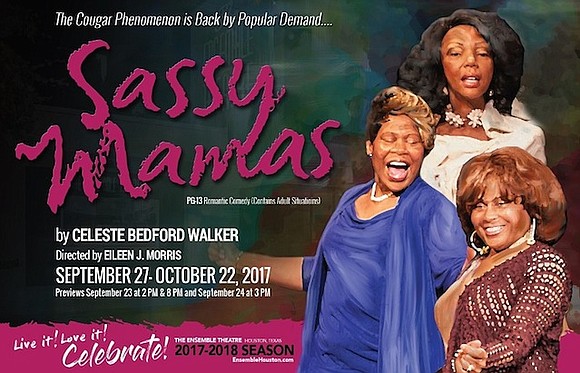 “We’ve waited with great anticipation to bring this show back for a second run after last year’s audience response,” says Morris. “This show may be the comic relief we need considering the recent impact of Hurricane Harvey…our thoughts and prayers are with everyone who was affected by the floods.”

NAACP Image Award-winning playwright Celeste Bedford Walker brings a delicate touch to her depiction of women of a certain age in her romantic comedy, Sassy Mamas. A story about three women—yes, “cougars”—who confidently pursue younger men. These three friends, women of substance and life achievement, each finding herself in a uniquely single situation and decidedly takes a proactive approach to love. The younger men they’ve set their sights on come with their own unique situations that only add to the humor and antics!

“It’s a play about empowerment for women and how they make their choices in life and to be open to different options at whatever season they’re in,” says Walker

The Ensemble Theatre's 2017-2018 Season is sponsored in part by grants from the City of Houston through the Houston Arts Alliance, Texas Commission on the Arts, and the National Endowment for the Arts. United Airlines is the official airline sponsor for The Ensemble Theatre.