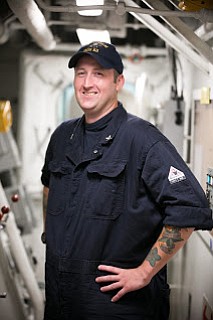 YOKOSUKA, Japan – A Houston native and 2001 Kerr High School graduate is serving in the U.S. Navy aboard the guided missile destroyer, USS Stethem.

Petty Officer 2nd Class Brian Press is a fire controlman aboard the forward-deployed Arleigh Burke-class guided missile destroyer operating out of Yokosuka, Japan. Stethem is one of eight destroyers forward-deployed in Yokosuka.

“I learned the value of hard work form my dad because he was always working hard and this helps me today in the Navy especially working in this high-tempo area,” said Press.

"Our alliance is rooted in shared interests and shared values," said Adm. Harry Harris, Commander, U.S. Pacific Command. "It's not hyperbole to say that the entire world has benefited from the U.S.-Japan alliance. While our alliance helped stabilize the region after the Second World War, it also enabled the Japanese people to bring about an era of unprecedented economic growth. And for the last six decades, our Soldiers, Sailors, Airmen, Marines and Coast Guardsmen have worked side by side with the Japan Self Defense Force to protect and advance peace and freedom."

Approximately 300 men and women serve aboard the ship. Their jobs are highly specialized and keep each part of the ship running smoothly, according to Navy officials. They do everything from maintaining gas turbine engines and operating the highly sophisticated Aegis weapons system to driving the ship and operating small boats.

Forward-deployed sailors are crucial to the success of the global navy mission and earn high praise from their leaders.

“Being forward deployed here in Japan the work is hard and fast paced but I feel like I fit right in here because I’m a hard worker and I enjoy experiencing and learning a new culture,” said Press. “We had an anti-terrorism force protection inspection and a visit, board, search, and seizure inspection that we did really well on. I volunteered in leading teams in these inspections not only because this is my wheel well, but also because I take these trainings and inspections serious."

“I serve in the Navy because I feel it is my duty to serve and I take pride in knowing that I am taking ownership of protecting our country,” added Press.