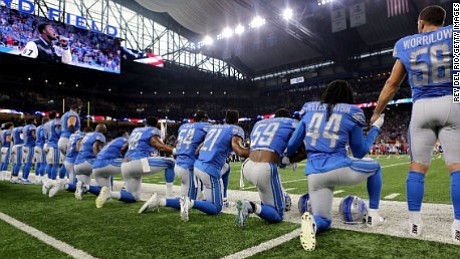 How NFL teams responded to Trump during anthem

(CNN) -- Stadiums across the US -- and even further afield -- became the focus of an unprecedented show of defiance against US President Donald Trump Sunday, as some NFL players locked arms or refused to stand for the national anthem, saying that they are protesting racial and social injustice.

Players from all 28 teams in the league that played Sunday participated in some form of protest. Some teams declined to take the field at all for the pre-game ceremonies.

Players have been protesting the anthem since last August, when then-San Francisco 49ers quarterback Colin Kaepernick started protesting the shootings of unarmed black men by police. Trump reignited the animus over players' anthem protests at a campaign rally for Republican Sen. Luther Strange on Friday.

Not just a knee: Photos from Sunday's anthem protests

At the rally, Trump angered many in the NFL by calling for team owners to fire any "son of a bitch" who "disrespects our flag." In response, an unprecedented number of players -- often backed by their teams' owners -- took action on Sunday

He followed up his comments on Twitter Sunday -- after the protests had taken place -- saying: "If a player wants the privilege of making millions of dollars in the NFL, or other leagues, he or she should not be allowed to disrespect our Great American Flag (or Country) and should stand for the National Anthem. If not, YOU'RE FIRED. Find something else to do!"

How did the protests play out?

On Sunday, players from several teams -- including the New England Patriots, Jacksonville Jaguars, Cleveland Browns, the Denver Broncos and the Miami Dolphins -- took knees during the anthem.

In a Sunday morning game being played in London between the Jaguars and the Baltimore Ravens, a number of players stood for the British anthem but sank to their knees for the American song. Jaguars owner Shad Khan locked arms with players during the anthem, and at least a dozen of his players took a knee.

With the exception of one player, the Pittsburgh Steelers didn't even take the field until the anthem was over. The Seattle Seahawks and Tennessee Titans also chose not to take the field for the national anthem.

At the Detroit-Atlanta clash, Detroit-based singer Rico Lavelle closed out his rendition of the anthem by taking a knee and holding his microphone aloft in his fist.

The protest has also spread to other sports. Ahead of Game 1 of the Women's NBA finals, the Minnesota Lynx stood with arms linked while the anthem played. Their opponents, the LA Sparks, were not on the court for the rendition.

Meanwhile, Oakland A's catcher Bruce Maxwell became the first Major League Baseball player to kneel during the national anthem, taking a knee alongside his standing teammates while holding his hand across his heart, according to an image tweeted by San Francisco Chronicle reporter.

Players on nonprofessional sports teams also showed their solidarity with the movement.

Away from the world of sport, legendary musician Stevie Wonder took both knees at a New York music festival, seemingly showing solidarity with the NFL players.

"Tonight, I'm taking a knee for America; but not just one knee, I'm taking both knees," he said on stage Saturday before his performance at the Global Citizens Festival.

While many have noted that Trump's comments were aimed at predominantly black players who took up Kaepernick's clarion call -- the former Niner is himself mixed-race -- and the initial protest focused what he deemed injustices against black men and minorities, Trump insisted that his criticism had "nothing to do with race."

A former football team owner himself (with the doomed USFL in the 1980s) and reportedly an aspirant NFL owner just a few years ago, Trump's attempts to divide the league owners from their players seems to have had the opposite effect.

Robert Kraft -- Trump's friend and owner of the New England Patriots who gave him a Super Bowl ring -- meanwhile said he was "deeply disappointed" by the President's tone.

Trump responds to NFL protests: 'Standing with locked arms is good, kneeling is not acceptable'

NFL players began to kneel during the national anthem last year, following Kaepernick's lead, who initially sat, and then evolved his protest to kneel during "The Star-Spangled Banner" before kickoff, sparking both support and backlash.

"I am not going to stand up to show pride in a flag for a country that oppresses black people and people of color," Kaepernick, who is currently without a team, told NFL Media last August.

"To me, this is bigger than football and it would be selfish on my part to look the other way. There are bodies in the street and people getting paid leave and getting away with murder."

Fans at Soldier Field, where the Bears took on the Steelers, fans voiced their disapproval of those kneeling in protest.

"(It's a) show of disrespect, not only for those who have fought and died for our country but for those serving," football fan Derek Zumbahlem told CNN's Ryan Young. "I disagree with it."

"I think personally that they should stand up for the national anthem," Amit Sud, a fan who wore a Bears jersey, said. "I do respect the players rights to take the knee. However, Soldier Field has history."

Trump responded to Sunday's protests via Twitter, expressing approval for those who locked arms, but not those who knelt.

"Great solidarity for our National Anthem and for our Country. Standing with locked arms is good, kneeling is not acceptable. Bad ratings!" he wrote Sunday afternoon.

The President had inflamed tensions further Saturday by withdrawing a White House invitation to basketball star Stephen Curry of the Golden State Warriors. Curry had remarked at the Warriors' media day Friday that he didn't want to attend the White House ceremony scheduled to commemorate the team's championship title.

NBA superstar LeBron James, who had earlier called Trump a "bum" for his stance on the Warriors' White House invite, released a video message.

"You look at (Trump) asking the NFL owners to get rid of players off the field because they're exercising their rights and that's not right," he said.

"When I wake up I see a colleague of mine has been uninvited of something that he said he didn't even want to go to in the first place... that's just something I can't stand for."

NHL champion Pittsburgh Penguins will attend the White House for a ceremony commemorating the team's Stanley Cup win, a statement released by the organization confirmed.

"The Pittsburgh Penguins respect the institution of the Office of the President, and the long tradition of championship teams visiting the White House," the statement reads.

"Any agreement or disagreement with a president's politics, policies or agenda can be expressed in other ways."