Trump Administration Calls for NFL Owners to Rule On Anthem 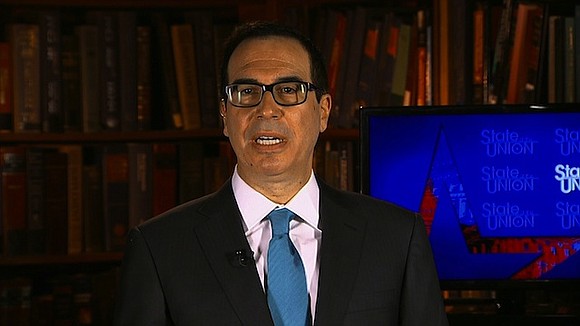 Treasury Secretary Steve Mnuchin said Sunday that NFL owners should decide on a rule on how to handle players who kneel in protest during the national anthem.

(CNN) -- Treasury Secretary Steve Mnuchin said Sunday that NFL owners should decide on a rule on how to handle players who kneel in protest during the national anthem.

"The owners should meet and decide on this rule the way they decide on any other rule," Mnuchin said on CNN's "State of the Union."

"The NFL has all different types of rules," he said. "You can't have stickers on your helmet. You have to have your uniforms tucked in. What the President is saying is, and I think, the owners should meet and they should vote on a rule."

While campaigning in Alabama on Friday night, President Donald Trump called out NFL players who take a knee during the national anthem as a way to peacefully protest.

"Wouldn't you love to see one of these NFL owners when somebody disrespects our flag to say, 'Get that son of a bitch off the field right now. Out. He's fired,'" Trump said Friday.

Trump reiterated his comments on Twitter over the weekend.

"Players have the right for free speech off the field. ... " Mnuchin told CNN's Jake Tapper. "This is about respect for lots of people, and I don't understand why there's rules that when the Dallas Cowboys wanted to put stickers on their helmets out of respect for people there, they couldn't do it, but now the NFL is saying people should be able to decide what they want to do and disrespect the United States flag."

White House Director of Legislative Affairs Marc Short made similar remarks in an interview on NBC's "Meet the Press."

"I think the reality is that there are coaches, high school coaches, across America today who are punished for leading their players in prayer," Short told moderator Chuck Todd. "And yet, when an NFL player takes a knee, somehow that player is presumed to be a martyr for a social cause."

"The President is saying, 'Yeah, the players have a First Amendment right, but NFL owners also have a right,' and that right is that these players represent their teams, and if the owners want to get rid of them, they should be allowed to get rid of them," he added.

Last year, then-San Francisco 49ers quarterback Colin Kaepernick refused to stand during "The Star-Spangled Banner" ahead of kickoff, sparking both support and backlash.

Kaepernick, who is currently without a team, told NFL Media last August: "I am not going to stand up to show pride in a flag for a country that oppresses black people and people of color."

When asked why Trump was choosing to take on this particular fight, Mnuchin said Sunday: "Again, you know, for as long as I can remember, people have stood in honor of our country; this isn't about politics. If people want to talk politics off the field when they're not working for the NFL, they have the absolute right to do that."