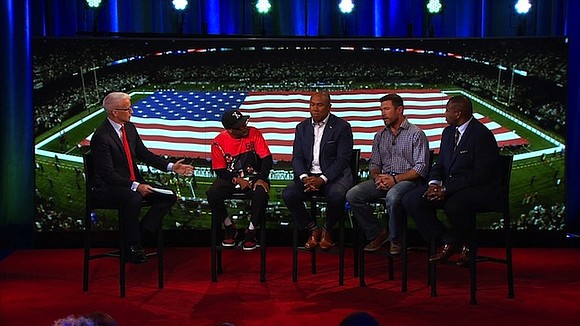 (CNN) -- Football fields have become forums for political debate over the past week, after President Donald Trump criticized players who kneel during the National Anthem to protest police brutality.

Trump and his aides have argued that the protests are unpatriotic and disrespectful to the flag and those who have fought to protect the US, while the players' defenders argue that they are exercising free speech by not participating in the anthem while standing with their hands over their hearts.

CNN's Anderson Cooper hosted a town hall to discuss the issue with NFL players and members of the military, including Philadelphia Eagles safety Malcolm Jenkins, who has raised his fist during the anthem, and former New York Jets player Michel Faulkner, who has said teams should stay in the locker room during the National Anthem if they can't honor the flag.

Activist and director Spike Lee, who has been outspoken on race and supports players who take a knee, will also participate.

"Politics and sports have always been intertwined. ... Race is a part of the DNA of this country," Lee said.

Jenkins said he no longer wanted "to stand behind social media" on the issue of police brutality, so he started by sitting down with local law enforcement.

Trump sent a series of tweets over the weekend and more into this week criticizing players who kneel during the anthem. "Sports fans should never condone players that do not stand proud for their National Anthem or their Country. NFL should change policy!" one of Trump's tweets read.

Trump first called out players who protest during the anthem in a speech Friday night in Alabama.

"Is there a cause for a protest? Absolutely. I get it ... but that's not the time or the place, to me," said Faulkner, who is now the pastor of New Horizon Church in New York City.

"Wouldn't you love to see one of these NFL owners when somebody disrespects our flag to say, 'Get that son of a bitch off the field right now. Out. He's fired,'" Trump said Friday.

The administration continued to weigh in on the issue through the weekend, including Treasury Secretary Steve Mnuchin, who said on CNN's "State of the Union" that the owners should rule on how to handle the players kneeling.

"The NFL has all different types of rules," Mnuchin said Sunday. "You can't have stickers on your helmet. You have to have your uniforms tucked in. What the President is saying is ... the owners should meet and they should vote on a rule."

"I am not going to stand up to show pride in a flag for a country that oppresses black people and people of color," Kaepernick, who is now without a team, told NFL Media last August.

Former US Army Green Beret Nate Boyer, who had convinced Kaepernick to kneel rather than sit during the National Anthem, said there's a difference between the two.

"I want Colin Kaepernick and every American to stand because they want to stand, but I want them all to stand. I'm more interested if someone is taking a knee because they really care about something than the guy in the stands, or the girl in the stands, or whoever, that feels obligated to stand up when the anthem is played," Boyer said.