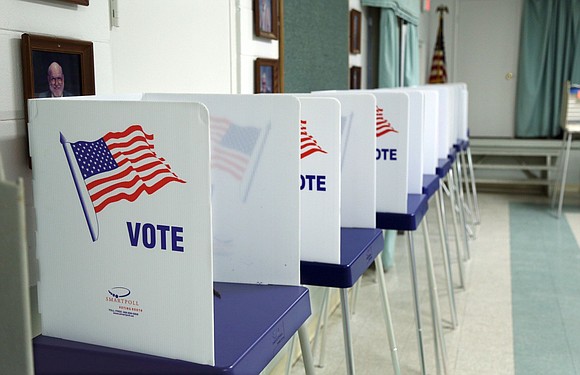 The Supreme Court will return to the issue of voting rights on Tuesday as the justices consider a lower court opinion that invalidated congressional and statehouse maps in Texas holding that they discriminated against minority voters.

(CNN) -- The Supreme Court will return to the issue of voting rights on Tuesday as the justices consider a lower court opinion that invalidated congressional and statehouse maps in Texas holding that they discriminated against minority voters.

Last fall, the justices indicated that they are already deeply divided in the case, when they split 5-4 down ideological lines and voted to freeze the lower court opinion pending appeal.

That vote likely means that the disputed maps will be used in the upcoming midterm elections, but the court's ruling could impact the drawing of new maps after the next census and the 2020 elections.

The case is the latest in a series of voting rights cases the Supreme Court is hearing this term including two partisan gerrymander cases and another challenge to Ohio's system for purging voters from its rolls.

Josh Douglas, an election law expert at the University of Kentucky College of Law, says that if the justices rule in favor of the challengers in the case and find intentional discrimination in how the Republicans drew the lines, it could be a watershed ruling.

"If the court rules against Texas, the justices would be saying that the Republican-controlled legislature had an improper racial motive," he said.

But that fact that five justices agreed to put the ruling on hold suggests that the conservatives on the court might be poised to reverse the lower court.

The case has been caught up in the courts for almost a decade.

After the last census, voting rights groups such as the Southern Coalition for Social Justice and the Mexican American Legal Defense Education Fund challenged the maps drawn in 2011 by the Republican-led legislature.

They won the challenge when a three-judge court of the District Court for the Western District of Texas held that the maps were intentionally discriminatory and proceeded to order new interim maps to be drawn up for the next election. The court stressed that its ruling was not a final judgment, but necessary due to impending election deadlines.

The legislature subsequently adopted those maps -- called Plan C235 --on a permanent basis while the litigation continued.

After a trial in 2017, the district court then invalidated two districts of Plan C235. The court noted that "specific portions" of the 2011 plans that were found to be discriminatory or unconstitutional "continue unchanged." In a similar case the court also invalidated several state legislative districts.

"The discriminatory taint was not removed by the Legislature's enactment of the court's interim plans, because the Legislature engaged in no deliberative process to remove any such taint, and in fact intended any such taint to be maintained but be safe from remedy," wrote US District Court Judge Xavier Rodriguez of the Western District of Texas.

Lawyers for Texas say the maps should stand, particularly because they were imposed by the court and adopted by the legislature.

"The District Court reached the remarkable conclusion that the legislature engaged in intentional discrimination when it adopted as its own the same plans that the court itself ordered the state to use in the 2012 election," Texas Solicitor General Scott Keller argued in court papers.

He noted that Plan C235 had been in place for half a decade.

"Any legal test that leads to the bizarre result that the legislature engaged in intentional discrimination by enacting court-imposed maps designed to remedy discrimination cannot possibly be right," Keller argued.

The challengers argue that the appeal is premature because the lower court has not yet ruled on a final remedy. And they say that it is up to district courts to "ferret out unlawful racial classifications and racial discrimination."

The Trump administration sided with Texas in the case.

"Courts should operate from a strong presumption that the state legislature's adoption of the judicially approved remedy was due to good faith compliance efforts rather than sinister motives," Solicitor General Noel Francisco argued in briefs.

The ruling in the case is due by late June, but Douglas points out that in 2020, after the next census, states will have to once again redraw lines.

"Depending on the Court's ruling, the Texas case could have a meaningful impact on how states all over the country draw their next maps," he said.