Korean Beauty Supply Store Owner Punches Black Woman in Her Face — In Front of Her Kids! 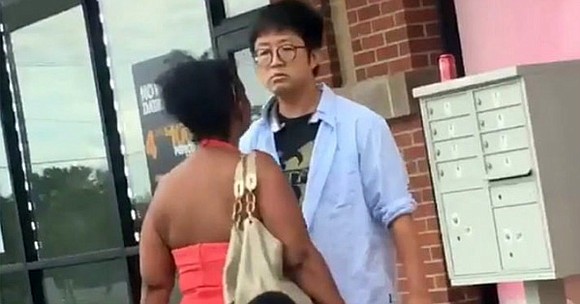 Changseok Jun, owner of beauty store who punched April Harding in the face

Tulsa, OK — A Korean owner of a beauty supply store in Tulsa, Oklahoma was caught on video punching an African-American customer in the face. Changseok Jun, the owner, will face charges in connection with the incident that has left a swollen lip to the woman identified as April Harding.

Last Monday, a video surfaced on the internet showing an Asian man punching a Black woman. According to reports, the man is the owner of Ann & Jun’s Beauty Supply named Changseok Jun.

Tulsa Police Sgt. Shane Tuell said the incident happened when the 3-year old son of the woman, identified as April Harding, allegedly pocketed a keychain worth $0.99 cents without paying. Jun then followed them outside and confronted her.

Jun’s action incited Harding to throw the keychain back to the store and push Jun. In response, Jun punched her hard in the face which left her with a swollen lip that had to be stitched.

Harding claims she and her son didn’t take anything unpaid from the store. “We never got out of the store with anything,” she said.

Regardless of anything, Harding believes Jun’s action was very much uncalled for. “He didn’t have to do anything that he did. Especially not hit me in my face,” she continued.

Jun has since been charged with assault and battery and is scheduled to appear in court on September 12.

Meanwhile, protesters are calling for a boycott of the business in response to the incident. Locals gathered outside the store to express their anger.

“For [Jun] to hit her is unacceptable,” Cleo Harris, an organizer of the protest, told the Tulsa World outside the store, which was closed on Monday. “You’re taking the Black dollar, but you don’t trust us coming in to buy your product that is a creation of us.”

Other people also brought their opinion to Twitter. A woman said, “I do think the response was disproportionate and done in retaliation, not to protect himself. Again, I wonder if he would have made the same choice if she was a white woman.”