Serena Williams' catsuit set to be consigned to the closet 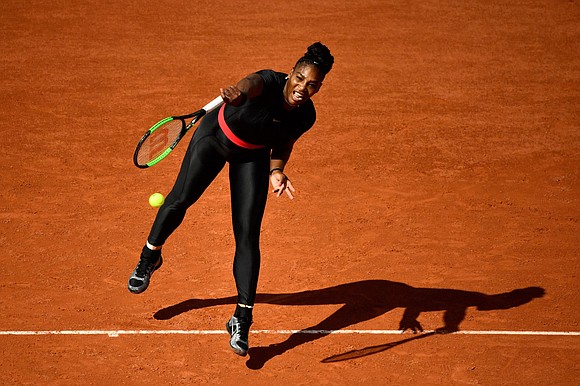 Serena Williams turned heads with her striking black catsuit in the first round of the 2018 French Open in Paris.

(CNN) -- Serena Williams' superhero-like catsuit is set to be consigned to the back of her closet, but "everything is fine" over the French Open's new outfit rules, according to the US tennis star.

The 36-year-old Williams initially wore the black catsuit in her first grand slam match since becoming a mom when she played at Roland Garros in May.

But there will no more outings for the striking outfit after the French Tennis Federation president Bernard Giudicelli said in an interview with Tennis Magazine that Roland Garros, one of the four grand slams, is introducing a dress code.

"I feel like a warrior in it, like a warrior princess, a queen from Wakanda maybe," said Williams of the catsuit when she wore it, referencing the fictional nation in sub-Saharan Africa, which is home to superhero Black Panther from Marvel Comics.

"It was comfortable to wear. I'm always living in a fantasy world. I always wanted to be a superhero, and it's kind of my way of being a superhero. I feel like a superhero when I wear it."

Giudicelli has insisted the new rules at the French Open -- a tournament Williams has won on three occasions -- won't be as strict as Wimbledon's all-white policy, but are being implemented because he thinks "that sometimes we've gone too far."

"It will no longer be accepted," he said of the catsuit. "One must respect the game and the place."

It's a stance that drew a withering response from Billie Jean King.

"The policing of women's bodies must end," tweeted the US tennis great. "The 'respect' that's needed is for the exceptional talent ⁦@serenawilliams⁩ brings to the game. Criticizing what she wears to work is where the true disrespect lies."

But Williams, who is preparing for the US Open which got under way Monday, has quashed suggestions of any rift.

"We already talked, we have a great relationship," Williams said of Giudicelli in a media conference, looking ahead to the US Open.

"We talked yesterday -- everything is fine guys," she laughed. "When it comes to fashion you don't want to be a repeat offender."

In an Instagram post after that French Open first-round victory over Czech Kristyna Pliskova -- her first match on clay since the 2016 French Open final -- Williams wrote: "Catsuit anyone? For all the moms out there who had a tough recovery from pregnancy—here you go. If I can do it, so can you. Love you all!!"

Meanwhile world No. 1 Simona Halep has been knocked out in the US Open first round, after she was beaten 6-2 6-4 by Estonian Kaia Kanepi.