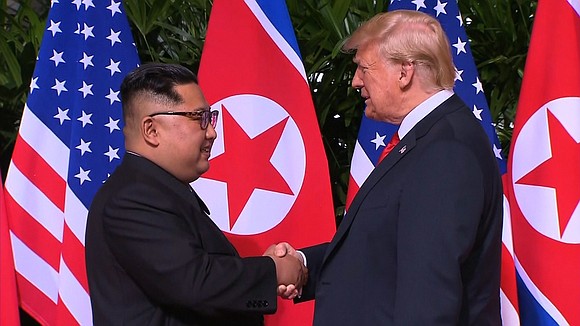 Now, with diplomacy with Pyongyang at an impasse and tensions rising, the payout for that gamble may be coming due.

The world is not yet back to the brinkmanship and "fire and fury" rhetoric between Trump and the isolated state that sparked fears of a slide to war last year.

But if rising angst between the US and North Korea turns into a more permanent fracture of the diplomatic initiative that peaked with June's summit between Trump and Kim in Singapore, fears of a conflict that could kill millions on the Korean Peninsula might return.

Apart from the human and geopolitical stakes, Trump would face an acute, personal political embarrassment if the prestige he has invested in the process turns out to have been for nothing. And Republican leaders, keen to paint him as a statesman with difficult midterm elections looming, could become collateral damage.

But the lack of progress is alarming many seasoned Washington foreign policy leaders, and may be a direct result of the lack of ironclad commitments won by the President in Singapore.

"I think we are back at a very tense moment," David Petraeus, the former Iraq War general and CIA director, said Tuesday on CNN's "New Day."

"I think, frankly, that the declaration that was achieved back when the President and Chairman Kim met was probably vaguer than one would have hoped. Denuclearization doesn't mean the same thing to us as it means to them."

The weeks since the summit have tested Trump's diplomatic credibility.

Since he returned home from Singapore boasting that he had removed the North Korean nuclear threat, Kim has taken few meaningful steps toward denuclearization. North Korea appears to be pressing ahead with the production of missile and nuclear material and has not given an accounting of its weapons programs that would be the basis for any meaningful disarmament process.

Last week, Trump suddenly ordered Secretary of State Mike Pompeo not to make a fourth visit to Pyongyang, throwing the diplomatic situation into yet more turmoil. CNN reported that North Korea had sent the administration a letter warning that diplomacy "may fall apart." The letter, which was first reported by The Washington Post, left the diplomatic process on a precipice and took the President closer to a looming decision point on whether to crank up political and military pressure on Kim or to offer concessions to pick the deadlock.

The latest developments have also put Trump in a tough political position, as critics argue that his naivete in holding a summit with no preconditions, in the absence of a planned out diplomatic process with a ruthless and resourceful foe, has backfired.

"One of the problems is that this administration doesn't seem to want to remember history. This is the fifth time we've been in negotiations about nuclear weapons with North Korea, and the dance has been pretty much the same each time," Maine's independent Sen. Angus King said Tuesday on CNN's "New Day."